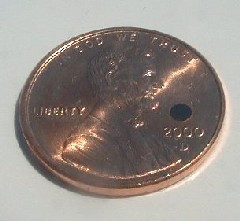 The dot above the date on this penny is the full size of the artificial silicon retina.
Photo courtesy Optobionics

The current path that scientists are taking to create artificial vision received a jolt in 1988, when Dr. Mark Humayun demonstrated that a blind person could be made to see light by stimulating the nerve ganglia behind the retina with an electrical current. This test proved that the nerves behind the retina still functioned even when the retina had degenerated. Based on this information, scientists set out to create a device that could translate images and electrical pulses that could restore vision.

Today, such a device is very close to becoming available to the millions of people who have lost their vision to retinal disease. The artificial silicon retina (ASR), developed by Optobionics, which was in FDA clinical trials as of late 2007, improved vision in 10 subjects over a period of two years [source: Groves]. As of late 2007, however, Optobionics was in bankruptcy and awaiting a buyer, which would allow the trials to continue.

As you can see in the picture at the top of this page, the ASR is an extremely tiny device, smaller than the surface of a pencil eraser. It has a diameter of just 2 mm (.078 inch) and is thinner than a human hair. There is good reason for its microscopic size. In order for an artificial retina to work it has to be small enough so that doctors can transplant it in the eye without damaging the other structures within the eye.

The most significant development in artifical retina research has been the Department of Energy's creation of the Artificial Retina Project, which is led by Mark Humayun. The ARP is a group of public and private companies, universities and research labs that has pooled their efforts to perfect a nano-size device. Since 2002, six blind volunteers have been fitted with the device, which has been successful in helping them perceive light and dark and large objects. The ARP also has two more devices in testing.