How the Artificial Silicon Retina Works 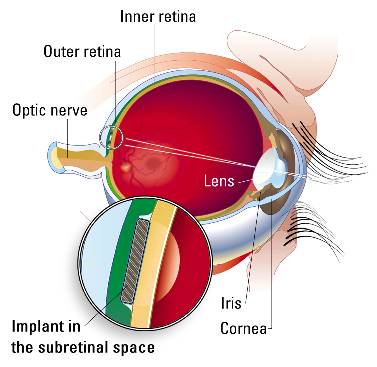 Here you can see where the ASR is placed between the outer and inner retinal layers.
Photo courtesy Optobionics

The ASR contains about 3,500 microscopic solar cells that are able to convert light into electrical pulses, mimicking the function of cones and rods. To implant this device into the eye, surgeons make three tiny incisions no larger than the diameter of a needle in the white part of the eye. Through these incisions, the surgeons introduce a miniature cutting and vacuuming device that removes the gel in the middle of the eye and replaces it with saline. Next, a pinpoint opening is made in the retina through which they inject fluid to lift up a portion of the retina from the back of the eye, which creates a small pocket in the subretinal space for the device to fit in. The retina is then resealed over the ASR.

For any microchip to work it needs power, and the amazing thing about the ASR is that it receives all of its needed power from the light entering the eye. As you learned before, light that enters the eye is directed at the retina. This means that with the ASR implant in place behind the retina, it receives all of the light entering the eye. This solar energy eliminates the need for any wires, batteries or other secondary devices to supply power.

Another microchip device that would restore partial vision is currently in development by a team of researchers from Johns Hopkins University, North Carolina State University and the University of North Carolina-Chapel Hill. Called the artificial retina component chip (ARCC), this device is quite similar to the ASR. Both are made of silicon and both are powered by solar energy. The ARCC is also a very small device measuring 2 mm square with a thickness of .02 mm (.00078 inch). There are significant differences between the devices, however.

Unlike the ASR, which is placed between layers of retinal tissue, the ARCC is placed on top of the retina. Because it is so thin, light entering the eye is allowed to pass through the device to strike the photosensors on the back of the chip. However, this light is not the power source for the ARCC. Instead, a secondary device attached to a pair of eyeglasses directs a laser at the chip's solar cells to provide power. The laser would have to be powered by a small battery pack.

According to researchers, the ARCC will give blind patients the ability to see 10 by 10 pixel images, which is about the size of a single letter on this page. However, researchers have said that they could eventually develop a version of the chip that would allow 250 by 250 pixel array, which would allow those who were once blind to read a newspaper.

To learn more about artificial vision, take a look at the links below.