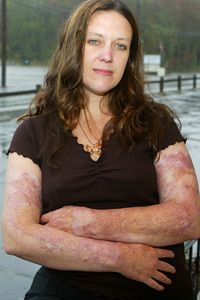 Fire is the ultimate biblical punishment. God destroyed the towns of Sodom and Gomorrah with a shower of flames and brimstone, and most imagery of hell includes promises of the same. Regardless of your faith or interpretation of scripture, it's hard to deny that a pretty powerful message is being sent. After all, even in this life, a burn injury is one of the most hellish things a body can endure.

In fact, until a few decades ago, the body usually didn't endure such trauma. Most people died from serious third-degree burns, in which both the upper and lower layers of skin (the epidermis and dermis, respectively), are destroyed. Doctors could predict a burn victim's survival rate by adding the person's age to the percentage of the body covered in burns, meaning that if a 50-year-old man came in with 60 percent of his body burned, he had a 110 percent chance of dying [source: Smith].

Skin, despite being only a few millimeters thick, serves a host of essential functions beyond just giving us something to look at in the mirror. The body's largest organ keeps our bodies hydrated, regulates body temperature and protects against bacterial infections. A burn victim is not only in constant pain, but at risk for dehydration, infection, decreased blood pressure and shock as the body loses its vital fluids.

In the past few decades, many advances have been made in treating burn victims, so that doctors no longer have to deliver terrible news about the staggering odds of survival. One crucial step forward in the 1970s was the decision to cut away the burned skin tissue as soon as possible after the victim was burned, so that the dead skin couldn't harbor life-threatening bacteria. The excision is a bloody procedure, and doctors needed to cover the open wounds to prevent infection. But what could serve this purpose?

In the 1970s, after deciding to perform routine skin excisions, doctors needed a skin covering that could serve as a layer of skin and protect a burned body, and they needed more sources for skin grafts. The problem with developing these things is that skin, despite being thin, is fairly complicated. It contains seven different kinds of cells arranged in a complicated structure that doctors still can't duplicate. At the time, researchers could replicate most of the various kinds of skin cells, but they couldn't get them to work together the way that healthy skin does.

The researchers were particularly struggling with cells known as keratinocytes, which make their way to the surface of the skin before sloughing off. Before the sloughing, keratinocytes emit chemical signals that activate skin growth, making them a key ingredient in skin regeneration. But without the proper skin structure, keratinocytes act bizarrely, so even though scientists didn't understand the exact configuration of skin, they had to create a foundation close enough to it that the keratinocytes could flourish. They also needed the structure to form without the skin cells related to the immune system or blood vessels, as these cells are why a burn victim rejects a skin transplant.

Researchers James F. Burke and Ioannas Yannas came up with the artificial means that could serve as a skin covering while encouraging keratinocytes. They knew that the base of the skin is made up of collagen-producing cells known as fibroblasts, so they created a layer of "skin" by using collagen from cows and sharks in combination with glycosaminoglycan, a sugar molecule.

The components in Burke and Yannas's creation were arranged so that they served as scaffolding for new, growing skin cells; fibroblasts migrated from nearby healthy cells and from transplanted skin grafts to form new layers of skin. Once the new dermis formed, the fibroblasts caused the temporary model to dissolve, and the new cells took over. Since the human dermis can't regenerate on its own, this was a particularly notable achievement; unfortunately, further development and approval by the U.S. Food and Drug Administration were delayed for years, which is why the technology is still not widespread [source: Smith]. The product is now known as Integra.

The artificial skin membrane, which resembled plastic wrap, both protected the patient and kick-started growth of the patient's skin cells. But burn victims were only halfway down the road to new skin; they still needed an epidermis.

Lab-grown Skin to the Rescue!

While lab-grown skin is often discussed in context of burn victims, it has multiple applications. People with unhealed wounds or ulcers could benefit from the product, as could animals used in laboratory testing. L'Oreal holds a patent for lab-grown skin derived from cells discarded during plastic surgery that can be formed into a skin substance [source: Carvajal]. The substance can then be used instead of animals to test reactions to cosmetics. Lab-grown skin might also be applied to robots, making them friendlier companions.

Growing Skin in a Lab: The Epidermis 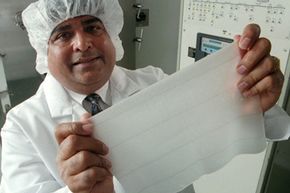 A man holds a piece of artificial skin from Integra. Grafts would be placed atop this piece.
Associated Press/Daniel Hulshizer

The artificial skin membrane developed by Burke and Yannas made it easier to apply skin grafts to a burn victim, but there was still the challenge of where to get the new skin. Doctors could cut skin from another part of the patient's body, stretch it and perform a transplant, but this painful procedure wasn't an option for patients who didn't have enough skin left to use. Doctors also tried using skin from cadavers, donors from the victim's family and even other species, but the patient's immune system usually rejected these grafts. They couldn't simply give burn victims an increase of immunosuppressants, either, as they're already so vulnerable to infection.

Researchers have had success growing new skin from the patient's own skin cells. If a patient's feet are unburned, for example, some skin cells in that area can be biopsied and sent off to a laboratory, where they'll grow thanks to nutrient feedings and multiple divisions. The process takes a few weeks, but eventually the cells will divide until they've created a sheet of skin 100 times the size of the original sample [source: Singer]. While skin cells that keep dividing are cancerous, the skin sheets have so far returned to normal once engrafted. Sometimes, the lab-grown skin is treated with an antibacterial protein to reduce the risk of infection while increasing the chance of transplant success.

Another source of new skin comes from a source that's usually designated for the waste bin: the foreskin of a circumcised infant. A piece of foreskin the size of a postage stamp can produce approximately 4 acres of skin tissue in the laboratory [source: Strange]. Artificial skin derived from foreskins is thought to be successful when donor skin is not because the newborns' cells don't rouse the host's immune system; if they did, mothers' bodies would reject fetuses [source: Skloot]. Foreskins are also sometimes used to create the structural framework for the dermis.

The lowered risk of infection is vital to the success of lab-grown skin; another plus is that the process results in minimal scarring. Patients regain most sensations from nerve endings, and if the burn victim is a child, the new skin will grow with the patient as he or she ages. Still, the process is not yet widespread and has a few difficulties to overcome: For one, the skin cells divide in the lab fairly slowly. The sheets of skin that leave the lab must be used almost immediately, yet they are so fragile that they can be difficult to transport. The lab-grown skin is also expensive; a 2001 article claimed that an 8 by 10 inch (20 by 25 centimeter) sheet of skin cost $2,000 [source: Smith]. 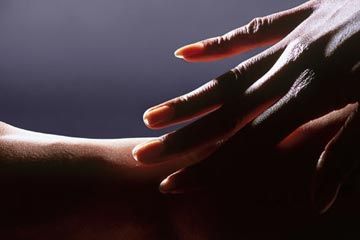 You May Like
How Your Skin Works
Explore More