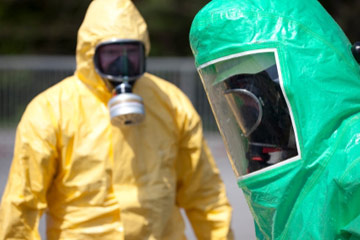 A pair of workers clean up a radiation spill dressed in protective gear designed to block their exposure to dangerous alpha and beta particles. See more pictures of nuclear meltdown disasters.
©iStockphoto.com/aprott

Radiation is pretty scary stuff. You usually can't see, smell or taste it, and you can only detect it reliably with special devices that few people have lying around the house. Yet, we constantly hear that radiation causes a wide range of harmful effects, from cancer and sterility to severe burns. One of radiation's more horrifying effects is commonly known as radiation sickness.

If all this talk of the horrors of radiation has you in a panic, here's something reassuring: most types of radiation are harmless; even the dangerous kinds won't cause radiation sickness unless you receive a large dose. In fact, any type of emitted energy is basically radiation, like the radio waves picked up by your car stereo, the heat given off by your toaster -- even the light given off by the sun. The kind of radiation that causes radiation sickness is called ionizing radiation. Ionizing radiation has a higher energy and higher frequency; this group includes ultraviolet, x-ray and gamma ray energy. As its name indicates, it's powerful enough to ionize -- that is, to knock an electron away from any atom it hits. In fact, ionizing radiation can even destroy an atom's nucleus.