How the Pet Microchip Works 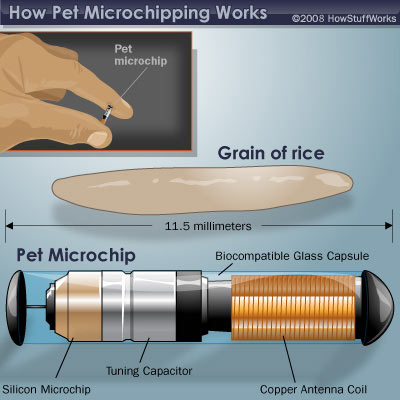 This is an illustration of the kind of microchip used in pets.
HowStuffWorks 2008

The basic technology behind pet microchips traces back several decades. But, it wasn't until recently that the devices became cheap enough to hit the mainstream pet market.

A pet microchip uses radio frequency identification (RFID) technology. RFID, as the name implies, uses radio waves as a medium to transmit information. An RFID tag stores data and, using electromagnetic forces for power, communicates that data to a device that interprets it. If you're curious about this process, read How RFID Works.

RFID tags come in different forms. Microchips in animals don't need to actively transmit information; they just hold information (a unique identification number for the pet). This type of tag, dubbed a passive RFID tag, has no battery and no internal power source. Rather it sits completely inert in the animal, waiting to be read.

A microchip capsule is roughly the size of a grain of rice and incorporates several components to help it do its job. First, the glass material that encapsulates the device is biocompatible. That means it's not toxic and doesn't hurt the animal's body, so your pet won't experience an allergic reaction to the device after implantation. Some versions of the microchip also include a cap made of polypropylene polymer to keep the chip from moving around once it's inside the animal. The polymer works by encouraging connective tissue and other kinds of cells to form around the capsule to hold it in place [source: Identipet]. Although surgical removal of the device is difficult, microchips don't expire or wear down. They're good for the life span of the pet.

Inside the capsule, you'll find the actual silicon microchip that holds the important information, as well as a tuning capacitor and an antenna coil. The capacitor receives power and sends it to the microchip. The microchip's information can then be picked up through the antenna, which is a copper coil.

Because it has no internal power source, a microchip like this needs a reader or scanner (also called an interrogator) to energize it [source: RFID Journal]. Often, manufacturers of microchips donate scanners to animal shelters. When set to the correct frequency, the scanner "interrogates" the microchip by invigorating the capacitor with electromagnetic power. When energized, the microchip capsule sends radio signals back to the scanner with the identification number. The scanner can then interpret the radio waves and display the identification number on an LCD screen (liquid crystal display screen). To learn more about how radio waves transmit information, take a look at How Radio Works.

Now that we know how the microchip works, we'll learn how this chip is implanted in a pet. Is it painful for the animal?

Invasion of the Information Snatchers

People, not just animals, have been implanted with microchips. For example, some people with medical conditions choose to be microchipped so that medical professionals can gain information on their health from a particular database. Companies can even have employees get implants so that scanners give them access to secure areas. But the idea of human implants is a hotly contested issue, and some privacy advocacy groups oppose it, claiming that the government could wind up using RFID technology to spy on civilians.