Can a microchip cause cancer? 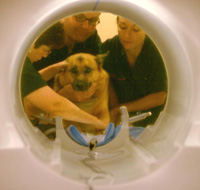 A dog undergoes an MRI scan to check for cancer.
Court Mast for Iams and Business Wire/Getty Images

As if frequency incompatibility isn't headache enough for the pet microchip industry and pet owners, studies show that microchips could cause cancer. In 2004, after investigating microchipping, the Food and Drug Administration (FDA) found the process to be safe enough for use in humans and animals. However, since the 1990s studies have shown evidence that microchips cause cancerous tumors to develop in rats and mice. One 2001 study revealed that 1 percent of the rats tested developed these tumors on their bodies near the place where the microchip was implanted [source: Elcock].

Katherine Albrecht, who founded Consumers Against Supermarket Privacy Invasion and Numbering (CASPIAN), wants the microchipping of humans to end, so she has been pushing these types of studies into the public eye. Her efforts succeeded when the Associated Press released a story in September 2007 indicating that manufacturers of microchips for humans dismissed (or were irresponsibly unaware of) studies that show microchips might lead to cancer. When the story broke, the companies' shares sharply fell [source: Feder].

Albrecht's CASPIAN group then published a summary she put together of 11 studies performed between 1990 and 2006 that investigated the microchip-cancer link, including the one we just mentioned. Most of these studies research rodents, but a few used dogs to attempt to discover whether there was causal link. Albrecht's report stated that eight out of the 11 studies found evidence for a link, as malignant tumors (often sarcomas, which affect connective tissue) developed near the area of the chip in many of the animals [source: Albrecht]. Albrecht concluded that the three studies that did not find this evidence were "deeply flawed" as they failed to either test a large enough population of animals or for a long enough period of time [source: Albrecht].

However, some believe more research is needed for conclusive proof. Skeptics argue that the conclusive evidence only applies to rats and mice, and the same evidence has not shown up in pet populations, despite the large numbers of microchipped pets. And who's to say whether the animals used in the study were predisposed to cancer [source: DVM]? Other people believe that the chance of the microchip causing cancer in a pet is miniscule compared to the benefits of pet recovery [source: Feder].

It's up to you to decide whether pet microchips are right for your pet. Read the next page to find links to more articles about animals and RFID technology, as well as Web sites of some major organizations behind microchipping.

Another Way to Keep Tabs on a Straying Dog

As an alternative to (or in addition to) using microchips, some people purchase pet collars with a GPS (Global Positioning System) device attached. Using measurements from satellites and cellular technology, these devices can send messages to your computer or cell phone to alert you when your dog has left a virtual safe zone, as well as where exactly your dog has strayed.