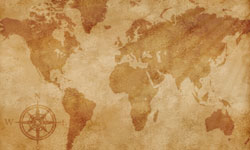 It's not entirely clear who first came up with the notion to convert thoughts into a written language. There was a horse race between the Sumerians in Mesopotamia, the Harappa in present day Pakistan and the Kemites in Egypt to be the first to formulate a written language. We do know that the first languages appear to have emerged around 5,000 years ago. One can even make the case that it dates back earlier -- that is, if one included artistic expressions like cave paintings as a form of written language. Once language began to develop, though, humans wrote on anything that would lay still long enough. Clay tablets, bamboo, papyrus and stone were only a few of the earliest writing surfaces.

Things changed once the Chinese -- specifically, a man named Cai Lun -- invented the prototype for modern paper. Before Cai's breakthrough, the Chinese wrote on thin strips of bamboo and lengths of silk, but in A.D. 105, he created a mixture of wood fibers and water and pressed it onto a woven cloth. The weave in the cloth allowed the moisture in the pulpy mixture to seep out, resulting in a rough paper [source: Wisconsin Paper Council]. Exactly what Cai wrote on his first piece of paper is unknown.