by Josh Clark
Prev NEXT
6 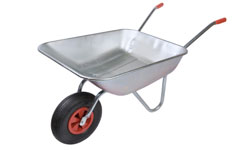 This innocuous contraption was originally an implement of war.
Luminis/iStockphoto

The Chinese are also responsible for easing the burden of humans around the world and across time with the wheelbarrow. A general named Jugo Liang, who lived during the Han Dynasty, is widely credited with coming up with the concept of a one-wheeled cart used to carry heavy objects in the second century [source: Krebs and Krebs]. Jugo's conception missed the mark just a bit; he didn't add the barrow (handles) that came later as his invention was refined. Still, Jugo beat the Europeans by about 1,000 years with his wheelbarrow.

Originally, the vehicle was intended for military purposes. Recognizing the physical advantages the wheelbarrow gave its armies over any enemies -- they were used as mobile barricades as well as for transportation -- the Chinese kept their invention secret for centuries.

An old folktale also gives the credit for inventing the wheelbarrow to a farmer from the first century B.C. named Ko Yu [source: Leinhard]. Although his existence is questionable, there is a common thread between Jugo and Ko: Like the general, the farmer is said to have kept the wheelbarrow secret by describing it in code.