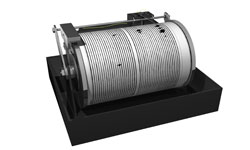 It's hard to believe, but this seismograph is the result of an elaborate bronze vessel created almost 2,000 years ago.
Jason Reed/Getty Images

Although the Chinese couldn't tell anyone exactly what an earthquake measured on the Richter scale (since the Richter scale wasn't created until 1935), they did manage to invent the world's first earthquake detector -- a seismograph. Not only did imperial astronomer Chang Heng create a seismograph during the Han Dynasty in the early second century, he created a magnificently beautiful one.

Heng's creation was a heavy bronze vessel with nine dragons facing downward embedded into its outside. The dragons were spaced equidistant from one another on the vessel, and below each dragon, a detached frog looked upward as each frog held its mouth open.

Inside the vessel, a pendulum hung motionless until a tremor moved it. At this point, the pendulum's swing set the seismograph's internal levers in motion. This would trigger the release of a ball held in the mouth of the dragon facing the direction of the earthquake's epicenter. The ball would then fall into the mouth of the frog directly below it [source: Xinhua News Agency]. This first seismograph seems a bit basic, but it would be another 1,500 years before Western nations developed their own versions [source: Asia Central].