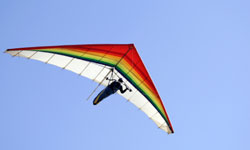 As we discussed earlier, kites were invented by the fourth century B.C. By the end of the sixth century A.D., the Chinese had managed to build kites large and aerodynamic enough to sustain the weight of an average-sized man. It was only a matter of time before someone decided to simply remove the kite strings and see what happened.

The Chinese were using untethered kites that we know today as hang gliders. However, these "kites" weren't used for thrill rides: Emperors found joy in forcing convicted criminals and captured enemies to jump off cliffs while strapped into the gliders. One poor man flew two miles before he landed safely [source: Wright]. With these early flights, the Chinese had beaten European ingenuity by 1335 years [source: Pleskacheuskaya].