by Molly Edmonds
Prev NEXT
7

The Compiler and COBOL Computer Language 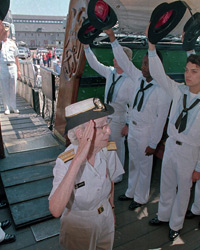 When we think about advancements in computers, we tend to think about men like Charles Babbage, Alan Turing and Bill Gates. But Admiral Grace Murray Hopper deserves credit for her role in the computer industry. Admiral Hopper joined the military in 1943 and was stationed at Harvard University, where she worked on IBM's Harvard Mark I computer, the first large-scale computer in the United States. She was the third person to program this computer, and she wrote a manual of operations that lit the path for those that followed her. In the 1950s, Admiral Hopper invented the compiler, which translates English commands into computer code. This device meant that programmers could create code more easily and with fewer errors. Hopper's second compiler, the Flow-Matic, was used to program UNIVAC I and II, which were the first computers available commercially. Admiral Hopper also oversaw the development of the Common Business-Oriented Language (COBOL), one of the first computer programming languages. Admiral Hopper received numerous awards for her work, including the honor of having a U.S. warship named after her.