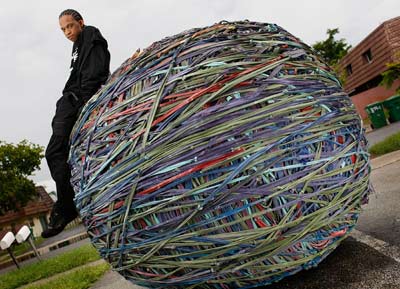 People do all sorts of stuff with rubber, like build 8,200-pound rubber band balls to achieve a Guiness World Record.
Getty Images

­"I'm rubber, and you're glue. Whatever you say bounces off me and­ sticks to you." Although you probably remember this saying from when you were a smart-alecky kid, it's an apt description for the substance we know as rubber.

The peoples of Mesoamerica, an ancient region of Central America and Mexico, are thought to be the first to have used this elastic chemical compound. They used rubber to make balls for a game that Columbus, and later the Spanish conquistadors, watched them play. To these peoples, rubber was called "caoutchouc." The English chemist Joseph Priestley was the one who later came up with the term "rubber" in 1770.

­Rubber is a specific type of polymer called an elastomer: a large molecule that can be stretched to at least twice its original length and returned to its original shape. Early forms of rubber had many gluelike properties­, especially in hot weather. In cold temperatures, rubber became hard and brittle. It was only after an accidental discovery b­y Charles Goodyear in 1839 that modern rubber became possible.

Since that time, rubber has become an important natural polymer in society. We make rubber from rubber trees (natural latex) and from oil (synthetic rubber). We use both types of rubber in many products. Like the Mesoamericans (Aztecs and Mayans) before them, athletes and children today play with rubber balls. Of course, the most common use for rubber is in automotive tires. But pencil erasers, shoes, gloves, dental dams and condoms contain the ubiquitous substance, too. In many products, rubber is added as a protective coating for either weatherproofing or shockproofing.

In this article, we'll look at the chemistry of this stretchy substance, where and how it's produced, and what Charles Goodyear's remarkable discovery was. We'll also look at the different types of rubber, some of your favorite products made from it and the industry respon­sible for producing it.

Up next: a journey to Central America.