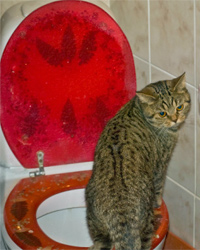 Even cats find them hilarious (and useful).
Hemera/Thinkstock

Scatological humor has a long history, so it's no surprise that toilets appear on our list. In fact, the sound of a flushing toilet has served as an instantly recognizable punch line in sitcoms for decades. One reason toilets are funny is that they level the playing field -- kings and queens must share this particular throne with even the lowliest peasants.

Toilets also have funny nicknames, such as "head," "can," "loo" and "privy." The funniest nickname -- crapper -- may be attributed to Thomas Crapper, the device's supposed inventor. In reality, Thomas Crapper didn't invent the toilet. Although he was a plumber and did hold patents, including three for water closets, Crapper can't take credit for the combination of bowl, plumbing and flushing mechanism we recognize today as a toilet. That honor goes to Sir John Harington, an Elizabethan courtier, translator and writer who installed a flush toilet in the palace of Queen Elizabeth in 1591. Harington described his invention in "The Metamorphosis of Ajax," the first book in a saucy trilogy that threw the writer into disgrace.

So, the next time you go to the john, give a bow to Sir John Harington for his contribution to modern sanitation. And if you prefer to use the crapper instead, then take note: The word "crap" isn't derived from Thomas Crapper's name. Some dictionaries trace the origins of the word back to the Dutch krappe, which itself is derived from the Dutch krappen, "to pluck or cut off." We'll let you figure that one out for yourself.

What's more hilarious than creating a profession dedicated to being funny? Head over to the following page to see if you've guessed our next concept.