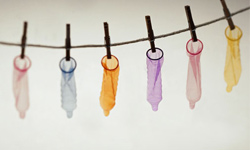 Condoms can induce giggles in just about any crowd. What other object can be used either to make balloon animals or to prevent pregnancy? And name one other invention that looks as simple to use, yet seems so mystifying when it's removed from its package? No wonder teenagers experience fits of nervous laughter when they learn about condoms in their sex ed classes. Often, kids are too embarrassed to buy them, and many need some lessons or practice before they can use them effectively. Did you know that condoms have a shelf life? Or that the worst place to carry a condom is in your back pocket or your wallet?

Phew, so many things to worry about.

Luckily, there is good news. For starters, modern lovers aren't the first to fret over condoms. The Egyptians used them 3,000 years ago, albeit in a slightly different form [source: Usborne]. Those ancient condoms were constructed from animal gut or fish membrane. By the 1840s, they were made of vulcanized rubber and could be washed and reused. Then came latex and the disposable condom. In fact, modern condoms should be removed immediately after ejaculation and disposed of properly, which means not in the toilet.

The real good news, however, is related to the efficacy of condoms in protecting against sexually transmitted infections and preventing pregnancy -- the pregnancy rate when the male condom is used perfectly is just 3 percent over 12 months [source: WHO]. So, condoms may make you giggle, but if you're sexually active, they can really, ahem, keep you covered.

Think you know the cell phone's roots? Head over to chuckle at our next choice.