When was the first battery invented? 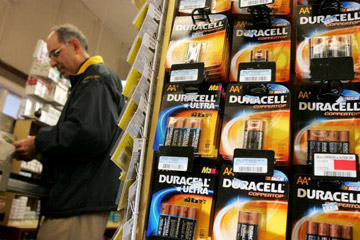 Batteries are a common source of power in our present age. We use batteries to start our cars, to power our laptops, to allow us to talk on our cell phones for hours and even to propel some of our electric vehicles for miles and miles on a single charge. They can range from sizes smaller than a pencil eraser to as large as 2,000 square meters (21,528 square feet). The largest battery in the world has the capacity to power the entire town of Fairbanks, Alaska, a city of about 12,000 people, for up to seven minutes in an emergency situation [source: Conway].

Some of the first primitive types of batteries can be traced all the way back to the Parthians around 250 B.C. when the they lived in the area of modern day Baghdad [source: Buchmann]. The Parthians made a clay jar, filled it with vinegar, then put a copper cylinder inside of it with an iron rod sticking out of the top. This early type of battery was used to electroplate silver.

But it wasn't until the late 1700s that scientists began conduct more serious experiments on electricity and its storage. Experiments were conducted that stored electricity or produced it, but none were able to create a continuous and controllable current of electricity. That is, not until the Italian physicist Alessandro Volta came along. In 1800, Volta created the first modern day battery when he built what came to be known as his voltaic pile. The pile was made of up of zinc and copper plates with vinegar- or brine-dampened pieces of leather or pasteboard placed in between each plate. The plates were then stacked in alternating order one on top of the other with the bottom plate and the top plate acting as the positive and negative terminals.

The pile looked like a stack of coins and created a constant flow of electricity that was less intense than previous attempts and allowed scientists to use electricity in controlled ways. A year after Volta first introduced his voltaic pile he presented his invention to the French National Institute, in which Napoleon Bonaparte was in attendance. In honor of Volta's invention, his name is used as the unit of electromotive measurement known as a volt.

For more information about batteries and other inventions, follow the links on the next page.