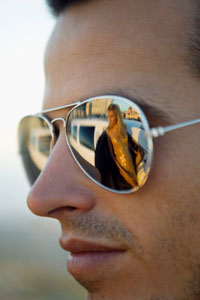 The UV protection in sunglasses is just one of several innovations from NASA's research in optics.
Jupiterimages/Getty Images/Thinkstock

Has anyone ever told you not to look directly at the sun because it would hurt your eyes? It's true that the sun puts off massive amounts of energy. Fortunately, the Earth's atmosphere reflects and scatters that solar energy before it reaches the planet's surface, protecting us from some of its harmful effects [source: Pidwirny]. If you're orbiting above Earth's protective atmosphere, though, you need more sophisticated technology to protect your eyes and skin from the sun.

When the National Aeronautics and Space Administration (NASA) prepared to send astronauts into space, eye protection and other optical considerations were essential components in developing its space helmets. Optics is the science of light, including how it's created, how to change and control it, and light-related phenomena like rainbows [source: Merriam-Webster]. Through its Technology Utilization Program (TUP), NASA has conducted optics research on space helmets that has made a substantial contribution to optics in many commercial products unrelated to space exploration [source: NASA].

In the 1980s, NASA researchers studied the harmful effects of ultraviolet light on the human eye. They found that ultraviolet light from the welding work that astronauts do caused inflammation of the cornea and long-term damage to the retina. To counter the effects of the UV light produced during welding, researchers developed a welding curtain to filter the light. The solution was inspired by the natural chemistry in the eyes of birds of prey, which allows them to spot targets over great distances [source: NASA].

The welding industry wasn't the only benefactor of this technology. If you're just walking outside in the sunlight, you're encountering the portion of the sun's ultraviolet (UV) light that isn't filtered through the Earth's atmosphere. Researchers have linked UV exposure in our eyes to the temporary discomforts caused by photokeratitis and the long-term effects of cataracts, which include possible blindness. To help protect your eyes, you can use sunglasses with UV protection. Eagle Eye Optics was established to use NASA-based technology in developing sunglasses with UV protection. Spurred by the increased awareness of UV's damaging effects (according to NASA's research), other industries found ways to add UV protection to other optical products, including eyeglasses and contact lenses [sources: NASA, AOA].

Next, let's look at some products that benefited from NASA's optical research and space helmet design.

Another NASA space helmet-related development in optics was virtual reality (VR) technology. VR was a huge buzz in both science and entertainment in the 1980s. At the 1986 Consumer Electronics Show (CES), NASA demonstrated a 3-D video helmet that allowed wearers to immerse themselves in a virtual reality environment. The helmet featured two small LCD TV screens from portable TVs, which were becoming popular at the time. The images changed to match the wearer's head movements. If the helmet had transparent screens, projected images could be overlaid on what the user would typically see through the visor.

Since that 1986 CES, computers have become more powerful, and VR devices went from prototype to reality. Today's VR devices are lighter-weight with better graphics. By 2004, NASA had developed VR technology that an astronaut could wear inside an orbiting vessel while controlling a robot doing repairs outside the vessel. This allowed astronauts to do repairs with human precision while avoiding the risks incurred by putting on a suit and floating in space. In addition, manufacturers like Mattel are translating that VR technology into a gaming experience [sources: Hawkins, NASA].

NASA's optics innovations have gone beyond just eyewear. For example, in 2003, Westinghouse Lighting Corporation began to sell its Eye Saver Easy Reading Light Bulb. Westinghouse developed the bulb to focus light on a work surface. This focused light improves working conditions for people suffering from macular degeneration. The technology behind the bulb came from a NASA researcher who applied his knowledge of the optics in deep space telescopes [source: NASA].

Snow skiers have also benefited from NASA's optical research. NASA needed to prevent windows in a spacecraft from fogging up prior to launch. To address this issue, NASA developed a coating for the windows consisting of detergent, oxygen-compatible oil and deionized water. Manufacturers of ski goggles obtained licenses from NASA to use the invention, allowing skiers to have clear vision while navigating the slopes [sources: NASA , Mercer].

Without NASA needing to solve the challenges of light in space, it's difficult to say what technology we'd have in eyewear, telescopes and other optical devices here on Earth. NASA's research has given us insight into eyesight we didn't have before, providing a boost to many developments in optics.

As part of creating the National Aeronautics and Space Administration (NASA) in 1958, the U.S. government wanted to ensure that industries outside of space exploration could benefit from NASA's scientific discoveries and technological innovations. To fulfill this goal, NASA established the Technology Utilization Program (TUP) in 1962. When NASA-influenced products started hitting the market, TUP began making annual reports about those products for congressional budget hearings. That annual report eventually morphed into NASA's intriguing annual publication and Web site called Spinoff [sources: NASA].