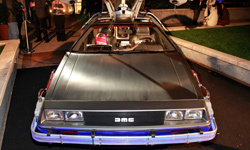 Do you remember the 1980s? It was a decade of big hair, neon-bright clothing and consumerism. A new television network called Music Television, or MTV, launched early in the decade and gave rise to the popularity of music videos. By the end of the 1980s, global politics would change forever as the Berlin Wall fell. During the decade, inventors created some cool devices.

This list could easily hold frivolous and quirky inventions -- there was no shortage of odd products in the 1980s. For example, there was the DeLorean DMC-12 sports car. The vehicle was a strange one -- journalists who took it on road tests reported that it handled poorly, didn't accelerate as quickly as other sports cars and wasn't particularly fast. The car had a distinctive look with its stainless steel panels and gull-wing doors, but it seemed doomed to obscurity. But then a little film called "Back to the Future" came out and propelled the DeLorean to new fame. It joined the ranks of other beloved time machines like the Doctor's TARDIS and Bill and Ted's phone booth.

Now that we've cleansed the pallet with a goofy entry, let's get down to serious business.