How does glow-in-the-dark stuff work? 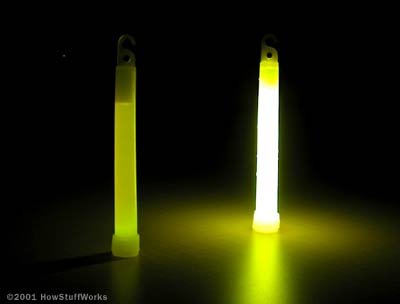 Light stick activation occurs by simply cracking a light stick and allowing the chemicals to mix.

If you have ever seen any of these products, you know that they all have to be "charged". You hold them up to a light, and then take them to a dark place. In the dark they will glow for 10 minutes. Some of the newer glow-in-the-dark stuff will glow for several hours. Usually it is a soft green light, and it is not very bright. You need to be in nearly complete darkness to notice it.

All glow-in-the-dark products contain phosphors. A phosphor is a substance that radiates visible light after being energized. The two places where we most commonly see phosphors are in a TV screen or computer monitor and in fluorescent lights. In a TV screen, an electron beam strikes the phosphor to energize it (see How Television Works for details). In a fluorescent light, ultraviolet light energizes the phosphor. In both cases, what we see is visible light. A color TV screen actually contains thousands of tiny phosphor picture elements that emit three different colors (red, green and blue). In the case of a fluorescent light, there is normally a mixture of phosphors that together create light that looks white to us.

Chemists have created thousands of chemical substances that behave like a phosphor. Phosphors have three characteristics: