How do they get lead in a wooden pencil? 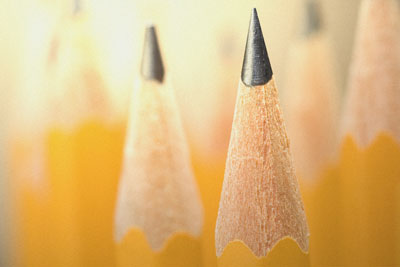 More than 14 billion pencils are produced in the world every year, enough to circle the earth 62 times.
Dale Wilson/Getty Images

Take a look at the writing end of a brand-new wooden pencil before sharpening it; it appears that the wood casing is one solid piece. This might lead you to believe that pencil-makers bore a hole straight down the middle of the wood and then slide in a rod of lead. Although early pencils were constructed in this manner, it is not how most wooden pencils are mass-produced today.

Before discussing how the lead is put into the wood cas­ing, let's clear up what the actual lead is. Pencil lead is not lead at all; it's a combination of finely ground graphite and clay, mixed with water and pressed together at high temperatures into thin rods. We call it lead is because the Englishmen who first discovered graphite believed they had found lead. According to the Cumberland Pencil Museum, in the mid-16th century, a violent storm knocked over several trees in Borrowdale, England, uncovering a large deposit of a black substance that was first thought to be lead. More than 200 years later, an English scientist discovered that the substance was not actually lead, but a type of carbon instead. The substance was named graphite, after the Greek word meaning "to write," since that's how people used the substance.

Early pencils were crude versions of today's standard model. The first pencil was just a chunk of graphite used by carpenters and artisans to make markings without denting their materials. This evolved into a graphite chunk wrapped in sheepskin, followed by a string-wrapped graphite pencil, the first pencil with a rod-shaped graphite core. To use one of these pencils, the writer would have to unravel the string as the graphite wore down. The next major leap in design was hollowing out a stick of cedar and sticking a piece of graphite down the hole, an idea often credited to the Italians. The English embraced this idea but simplified the manufacturing process considerably. Instead of hollowing out a piece of wood, they simply cut a groove in the wood, inserted a piece of graphite and broke it off level with the top of the groove. They then glued a small slat of wood on top, encasing the graphite.

Today, most wooden pencils are mass produced from large blocks of cedar cut into slats. A machine cuts eight grooves, half as deep as the graphite-clay rod is thick, into the slats, and then places rods in each groove. Once the rods are in place, a second grooved slat is glued on top of the first. When the glue dries, the slats are fed through a cutting machine that cuts the wood into various shapes and divides the slats into eight separate pencils. The seams where the two slats are joined are sanded down and several coats of paint are applied to the pencil, giving it the appearance of a solid structure.

According to Musgrave Pencil Co. Inc, more than 14 billion pencils are produced in the world every year, enough to circle the earth 62 times. This pile of pencils includes a wide variety of styles and widths. If you've ever have taken a fill-in-the-bubble test, you're probably aware that pencils vary in darkness. The number printed on the side of the pencil indicates hardness and darkness of the graphite core: the higher the number, the harder the graphite core. Because a hard core leaves behind less of the graphite-clay mixture on the paper, it will have a fainter mark than a softer core.