Browse the article What if I shot my TV?

Every now and again as you're driving down the freeway, you'll see that famous bumper sticker that says, "Shoot Your Television." And many times as you're watching television, the thought of a well-placed shot may cross your mind. Whether it's a bad game for the home team, a bad sitcom or a bad commentator spouting off about something, there are lots of reasons to kill the tube.

What if you did actually take it out back and shoot it? We are, of course, talking about a standard television with the huge glass picture tube so there's something big and meaty to aim at. TVs in the 25-inch and greater range have a massive piece of glass that weighs between 50 and 100 pounds.

Here at HowStuffWorks headquarters we actually tried this experiment.

Since it is a vacuum tube, there's been a lot of discussion in the urban legend community about a massive implosion that would occur when the bullet first cracked the glass. The idea is that the vacuum would suck the glass fragments in and then they would rebound at shrapnel speed.

At least when we tried it here, nothing like that happened. The bullet went in very cleanly, punched a very neat hole through the glass, and air quickly filled the tube through that hole. There certainly was not an implosion.

Will TV ever be the same? 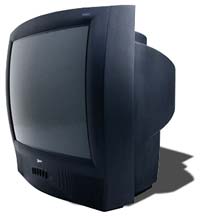 After you've taken the shot, there's no good reason not to take the whole thing apart and explore the interior. So that's what we did. A hammer cracked away the rest of the glass, and here's what was inside:

So that's what would happen if you actually shot your television. It's probably not an experiment that you need to repeat, because what you end up with is 50 pounds of leaded glass fragments all over the yard, and it makes a big mess!