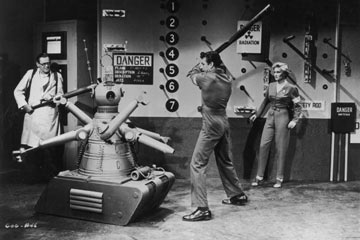 Outside the world of comics and horror flicks, funding is pretty tight, especially for mad scientists. You'd be surprised how hard it is to snag a government grant when your proposal includes snippets like "a deep penetrating dive into the plasma pool" and "bow down before me." As such, most government-funded research tends to stay away from atomic supermen.

Countless constructive, life-changing breakthroughs trace back to government-funded labs, from various vaccines to microwave ovens. The comfy insoles in your shoes, for instance, are just one everyday wonder brought to you by NASA.

Still, the occasional oddball premise slips past the people who control government grant applications. Regardless of the possible benefits to humanity, these are the government experiments that garner the most attention. After all, the prospect of genetically modified flying piranhas is troubling enough, but tack on "tax-funded" and you have a real public outcry on your hands.

In this article, we'll leave behind the drive-in theaters and the horror aisles of the video store and breeze through five of the craziest real-life government experiments we could find.

Getting Ahead in the Cold War 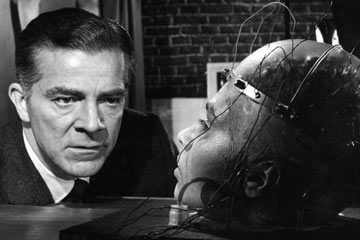 This scene from 1966's "The Frozen Dead" features just one of many living disembodied heads to chew up screen time in horror and science fiction.
Keystone Features/Getty Images

The 1950s and '60s were a golden age for scientific optimism. Humans were venturing into outer space, watching television and finally glimpsing the cascading grace of DNA's double helix -- all of which helped to soften the blow of looming nuclear annihilation. Still, provided humanity didn't destroy itself, the future looked bright. In the wake of the first successful long-term human organ transplant (a kidney) in 1954, could human head transplants really be that far off?

While sometimes more morbid than scientific, our fascination with life-after-decapitation stretches back pretty far -- past the guillotine gawkers of the French Revolution and back to the era of cruelly sharpened stones. Even today, it remains one of medicine's final frontiers, offering possible alternatives to quadriplegics with organ failure.

As was often the case during the mid-20th century, dogs and monkeys wound up making some huge sacrifices for human science. U.S. surgeon Charles Guthrie transplanted one dog's head onto the neck of another in 1908 and, with government funding, the Soviet surgeon Vladimir Demikhov attempted a canine upper body transplant in 1951.

Not to be outdone, the United States funded the work of neurosurgeon Robert J. White in the mid-1960s. White experimented with the transplantation of dog and monkey brains into the necks and abdomens of other animals. His work culminated with a 1970 experiment that saw the head of one living rhesus monkey transplanted onto the headless body of another.

The Sad Case of Acoustic Kitty 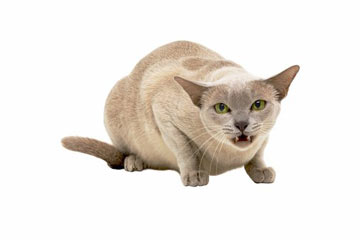 And we wonder why they pee on all our stuff.
George Doyle & Ciaran Griffin/Stockbyte/Getty Images

The subject of animal experimentation for the advancement of medical science or space exploration can prove a tricky topic, as you might imagine. Say what you will about swapping monkey heads, but those experiments taught us much of what we know about the possibilities and limits of full body transplants. Still, this argument doesn't win over everybody. Even fewer people buy into the necessity for the United States Central Intelligence Agency's (CIA) deployment of "Acoustic Kitty."

It was the 1960s, the midst of the Cold War, and espionage was the stage for many of the machinations between the U.S. and Soviet superpowers. Given the political climate, you might be tempted to forgive the CIA for blowing five years and more than $10 million attempting to train a cat, but the addition of surgically implanted listening equipment, a battery and a tail-based antenna tend to tip things in favor of the critics [source: Edwardes].

Following further surgical attempts to bug the cat and curb its hunger, it darted under a taxicab during a field test and died. Was the animal's death an accident or an act of sacrifice to end a monstrous program? Today, house cats continue to ignore their human owners, presumably free from surgically implanted spy equipment.

The American public didn't learn about Acoustic Kitty until the related documents were declassified in 2001. 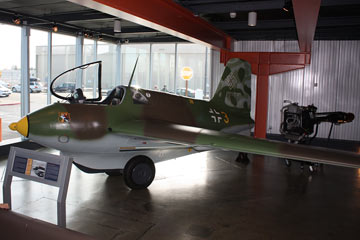 Some experts believe the Luftwaffe's rocket-powered Messerschmitt 163 Komet may have been classified as a "foo fighter" by Allied pilots.
Blueviking63/Creative Commons license

The subject of secret Nazi experiments generally follows two paths; it either dives into the horrors of the Holocaust or explores the ridiculous annals of conspiracy theory, complete with whisperings of a secret Antarctic base and Hitler's UFO escape into the Hollow Earth. Is a shred of truth mixed in with the fantasy?

British journalist Nick Cook thinks there might be. As detailed in his book "The Hunt for Zero Point," the former Jane's Defence Weekly aviation editor explored the possible existence of Nazi antigravity experiments; that is, research into "zero point energy," a quantum effect caused by virtual particles winking in and out of existence [source: Kleiner].Cook argues that some of this technology was glimpsed by Allied pilots as unidentified "foo fighter" aircraft. He even argues that some post-war UFO sightings may be due to U.S. and Russian programs based on seized technology.

As a decorated journalist and noted authority on the black budgets that fund top secret government projects, Cook stands apart from most conspiracy writers. Plus, his case for Germany's wartime antigravity program gains some credibility given current projects by the likes of Boeing and NASA to develop gravity-shielding technologies. 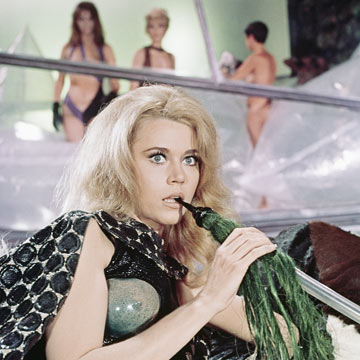 Orbital intercourse will most likely involve interlocking garments, anchoring Velcro straps and a great deal of awkwardness. Just go ahead and forget anything you saw in "Barbarella."
Camerique/Hulton Archive/Getty Images

Space experiments often win the prize for weird, from blasting doomed chimps into orbit to rewarding weightless, web-spinning spiders with filet mignon dinners. On the opposite end of the spectrum, you have the crème de la crème of pulp science-fiction fantasies: space sex.

In 2000, French astronomer Pierre Kohler made headlines when he claimed in his book "The Last Mission" that NASA studied the feasibility of ten low-gravity sex positions during a 1996 space shuttle mission (NASA vehemently denies this). Not to be undone, the Russians allegedly carried out experiments related to "human docking procedures" as well [source: Shipman].

Experiments concerning the effects of space on the human reproductive system are nothing new. After all, if you set aside all the cultural baggage, sexual reproduction is a central process. In the early days of space exploration, there was even uncertainty on how a trip into orbit might affect a human's ability to procreate.

Soviet scientists paid especially close attention to cosmonaut Valentina Tereshkova's 1964 pregnancy. After returning from orbit, Tereshkova married fellow cosmonaut Andreyan Nikolayev and soon became pregnant with the world's first child born of two veterans of space flight. The couple's daughter turned out perfectly healthy, but the case was largely uncharted territory in the growing field of space medicine. The timeliness of the parentage even led some to question whether the union might have been arranged -- a science experiment in itself [source: O'Neill].

As for the future of space sex, proponents say it's just a matter of time and that it would be unrealistic (and possibly unhealthy) to forbid sexual activity aboard multiyear manned missions. 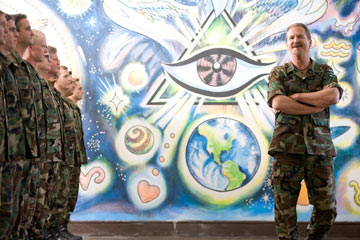 The 2009 film "The Men Who Stare at Goats," based on the book by Jon Ronson, dealt with the U.S. Army's exploration of the paranormal.
Image courtesy Overture Films

Paranormal research is hardly a hotbed of credibility these days, but for a time it wasn't just a topic of serious discussion, it was a matter of national security. The Cold War between the Soviet and American superpowers saw an arms race, a space race and, believe it or not, a struggle for dominance of paranormal forces.

The U.S. Defense Advanced Research Projects Agency (DARPA) reportedly sunk millions into its 1970s psychic spy program. All of this federally funded research took place in an effort to keep up with the Russians, who had been researching telepathy since the 1920s [source: Greenemeier].

Can you imagine a world where submarine crews use telepathy to communicate with the surface? How about a space race in which cosmonauts use precognition to dodge orbital collisions and psychics meld their mind with that of a computer? The Soviets could imagine such things, and they funded the research to determine their feasibility.

It's impossible to single out a winner in the psychic cold war. According to an 1973 DARPA-commissioned study by the RAND Corporation, the Russians and Americans both put roughly the same amount of effort into their paranormal programs.

The big difference, according to the report, was that the U.S. study tended to rely more on psychology while the Soviets focused on biological and physical theories. In their conclusions, the RAND Corporation determined the U.S. program a failure while the Russian were more likely to excel -- providing there's a shred of truth to any of the hypnotists and spoon benders they studied. How's that for a backhanded compliment?

Explore the links on the next page to learn even more about strange experiments, mad scientists and the paranormal.