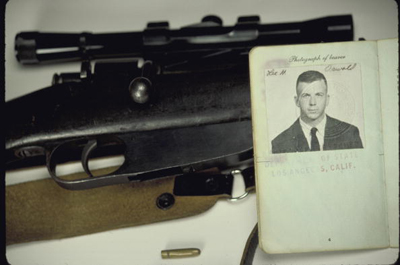 Evidence condemning Lee Harvey Oswald. Which is the simplest theory? Was President John F. Kennedy assassinated by a lone gunman, or was his death the result of a CIA plot?
Terry Ashe/Time Life Pictures/Getty Images

You have to wonder what William would make of the use of his principle to disprove the existence of God since he was a devout Franciscan monk. He probably would point out that the razor isn't a tool that establishes proof. For this very reason, some groups say that it doesn't have much use. Others have no problem with Occam's razor, they just don't like the way other groups use it to discount theories.

Some religious thinkers don't believe the razor serves much of a purpose at all. Religion is based on faith, not evidence. The complexities of a world based on a creator god defy Occam's razor. The idea is inherently irrational, after all. What's more, we have no empirical evidence of the existence of God. But religious thinkers point out that evidence of God's existence is all around us -- in the form of trees, the atmosphere and human beings.

Occam's razor is sometimes used against conspiracy theorists. Usually, it's skeptics who lock horns with conspiracy theorists, using the razor as proof that conspiracists are too far-reaching in their explanations. Take, for example, the assassination of President John F. Kennedy. The idea that he was killed by a single, overzealous Communist gunman is a much simpler explanation than the idea that he was murdered by a CIA conspiracy, which would involve treachery on levels unseen in U.S. history to that point.

But does the fact that one explanation is simpler mean it's correct? Conspiracy theorists can produce all manner of circumstantial evidence that points to many different plots. But according to Occam's razor, this extra evidence would be considered irrelevant in the face of the lone gunman explanation. In this case, Occam's razor only serves to fuel the debate when it's used to discount conspiracists' theories.

The limitations imposed by Occam's razor and its use with the scientific method drove one man up the wall. Charles Fort was a writer who lived in the late 19th and early 20th centuries in New York and London. He shared William of Occam's life of poverty, but for different reasons. While William took a vow of poverty for religious reasons, Fort's poverty was a byproduct of his commitment to uncovering universal truths.

Charles Fort spent his days researching in the great libraries of New York and London. There he investigated all manner of phenomena, scientifically proven and otherwise. While he admired and accepted the field of science's potential for explaining the universe, he developed a disdain for the scientific community and its stubborn refusal to accept the existence of anything that couldn't be explained by the scientific method [source: Charles Fort Institute].

To that end, Fort was determined to apply science to the investigation of the paranormal -- that which exists outside of science, like ghosts. His work is carried on today, in the form of paranormal investigators at respected institutions around the world, like the University of Edinburgh. In this sense, it's easy to see the parallel between Fort's quest to apply rational thinking to explain the unseen and Occam's explorations of the nature of God.

For lots more information on Occam's razor, related How Stuff Works articles and other links, visit the next page.