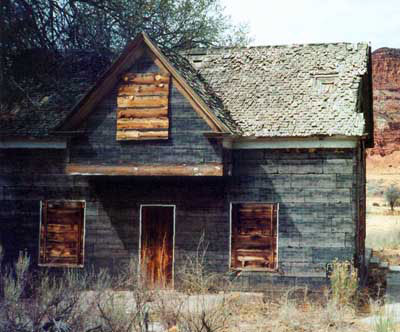 Image courtesy Stock.xchng More than a third of Americans believe houses can be haunted.

Several years ago, I stayed in a small apartment adjoining an old cabin. The property was far from ­city lights, and on clear nights, the shadows could be a little spooky. Sometimes, especially in the dark evenings of the fall and early winter, I had the uncanny sense that I wasn't alone.One night, while I was in the apartment, I heard a muffled thump that seemed to come from inside the cabin. Ordinarily, I would have dismissed the sound as the settling of the century-old building. But it was an eerily still night, and I already found the terrain around the cabin unnerving after dark. After hearing the sound several times, I started to wonder whether something supernatural was at work, but I hesitated to investigate.

­In the morning, I heard the sound again while I was outside. When I turned to see what it was, I saw an apple rolling across the grass. Testing a theory, I picked up the apple and dropped it. The sound was identical to the one that had frightened me the night before.

In daylight, looking at the fallen apples under a tree, the idea that the cabin could be haunted seemed silly. But dark nights and old buildings can cause even the most skeptical people to wonder about the existence of ghosts. According to a 2005 Gallup poll, more than a third of Americans believe that houses can be haunted, and about 32 percent believe specifically in ghosts [Source: The Gallup Poll News Service].

According to believers, a ghost is the spirit of a dead person that either has not moved on to the afterlife or has returned from it. The definition of "spirit" can vary. Some describe it as a person's soul, while others believe it is an energetic imprint that a person leaves on the world.

Humans have believed in -- or been skeptical about -- ghosts for thousands of years. They're even mentioned in the oldest known written work of literature, "The Epic of Gilgamesh." Ghost stories are part of most cultures' folklore, although the details vary considerably from region to region. In the next section, we'll take a closer look at ghostly encounters.

The Death of Ghosts?

Reports of ghosts bearing­ the news of deaths or disasters were frequent in the Victorian era, but they seem to be less common today. Researchers have offered a couple of possible explanations for this drop-off in supernatural messengers:­