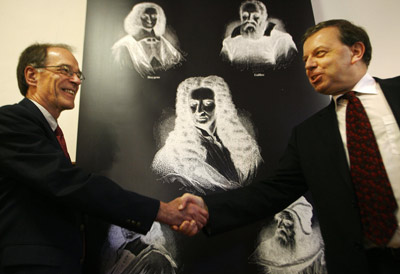 Philip Campbell, (R) the editor-in-chief of Nature greets Colin Norman, the news editor at Science in 2007. If Campbell gives your work the nod, you're golden.
Miguel Riopa/AFP/­Getty Images

­Peer review, also known as refereeing, is the cornerstone of science. It is a process whereby a scientist's research is assessed for quality before it is funded or published. The "peer" in peer review means that the scientist in question will submit his work to other experts in the field. In other words, if the scientist is a biologist studying the migration habits of a particular bird, he will submit that research to colleagues who have sufficient knowledge of birds and bird migration to give a thorough and proper evaluation. It's the job of the reviewers to comment on the quality, significance and originality of the research. Reviewers aren't the ultimate arbiters about whether research should be funded or published, but their comments inform the decision makers.

Who the decision makers are depends on the type of peer review taking place. One type happens at the beginning of a scientist's research project, when he is submitting a research proposal to be considered for a grant. In this case, the decision maker is the funding body that will award the grant based, in large part, on the review given by the referees. The other type of peer review happens at the end of a scientist's research project, when he prepares to have the results of his investigation published in a scientific journal. All scholarly journals, just like consumer magazines, have editors who reign as the ultimate decision makers, but they rely on comments from the reviewers to decide which papers they will publish.

The rest of this article will focus on the peer review process used by scholarly journals, which are quite different than mainstream publications, such as Popular Science, Discover and Scientific American. They feature articles written by research scientists for other scientists to read. By publishing in a journal, a scientist helps to spread scientific knowledge and stimulate further research and discovery. Specifically, a scientist can:

The last bullet is a key aspect of what scholars refer to as "publish or perish." It's a particularly descriptive way to characterize the pressure scholars feel to publish work in leading academic journals. Frequent publication improves a scientist's visibility, which in turn raises the reputation of the sponsoring institution, which in turn attracts more funding dollars. If a scientist fails to publish regularly, he risks losing this financial lifeline. He might be asked to stop his research and, in the worst-case scenario, lose his position. That's the "perish" part -- and why academic journals are so important to researchers all over the world.

Not all scientific journals use a peer-review system, but the most prestigious do. You've no doubt heard of the New England Journal of Medicine, the Journal of the American Medical Association (JAMA), Science and Nature. All of these are peer-reviewed journals representing the pinnacle of scientific publication. Their reputations owe much to the peer review processes they employ to ensure the quality of their content. Although these premier journals cast a long shadow, there are many other well-respected scientific, technical and medical publications. There are also many that fall far below the high standards set by a Nature or Science. In total, there are approximately 21,000 peer-reviewed journals publishing more than 1 million research papers a year [source: Sense About Science].

Next, we'll look at the typical peer review process used by these journals.