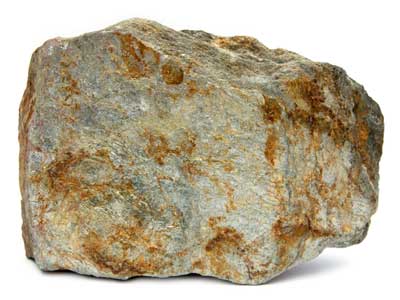 It may not look like much, but this lump of iron ore is the starting point of everything from precision surgical equipment to reinforced skyscrapers.
© iStockphoto.com/Susan Daniels

­Before many ancient civilizations began to transition from their bronze age to an iron age, some toolmakers were already creating iron implements from a cosmic source: meteorites. Called 'black copper" by the Egyptians, meteoric iron isn't the sort of substance one finds in huge, consolidated locations. Rather, craftsmen found bits and pieces of it spread across great distances. As such, this heavenly metal was mostly used in jewelry and ornamentation. While blacksmiths occasionally used meteoric iron to craft swords, these prized weapons were usually relegated to men of great power, such as the seventh century Caliphs, whose blades were said to have been forged from the same material as the Holy Black Stone of Mecca [source: Rickard].

The majority of Earth's iron, however, exists in iron ore. Mined right out of the ground, raw ore is mix of ore proper and loose earth called gangue. The ore proper can usually be separated by crushing the raw ore and simply washing away the lighter soil. Breaking down the ore proper is more difficult, however, as it is a chemical compound of carbonates, hydrates, oxides, silicates, sulfides and various impurities.

To get to the bits of iron in the ore, you have to smelt it out. Smelting involves heating up ore until the metal becomes spongy and the chemical compounds in the ore begin to break down. Most important, it releases oxygen from the iron ore, which makes up a high percentage of common iron ores.

The most primitive facility used to smelt iron is a bloomery. There, a blacksmith burns charcoal with iron ore and a good supply of oxygen (provided by a bellows or blower). Charcoal is essentially pure carbon. The carbon combines with oxygen to create carbon dioxide and carbon monoxide (releasing lots of heat in the process). Carbon and carbon monoxide combine with the oxygen in the iron ore and carry it away, leaving iron metal.

In a bloomery, the fire doesn't get hot enough to melt the iron completely. Instead, the iron heats up into a spongy mass containing iron and silicates from the ore. Heating and hammering this mass (called the bloom) forces impurities out and mixes the glassy silicates into the iron metal to create wrought iron. Wrought iron is hardy and easy to work, making it perfect for creating tools.

­To create higher qualities of iron, blacksmiths would require better furnaces. The technology gradually developed over the centuries. By the mid-1300s, taller furnaces and manually operated bellows allowed European furnaces to burn hot enough to not just soften iron, but actually melt it.