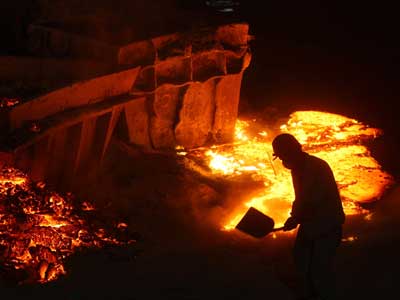 A worker covers the steel slag poured on the ground with sandy soil at a stainless steel factory.
China Photos/Getty Images News/­Getty Images

­The more advanced way to smelt iron is in a blast furnace. A blast furnace is charged with iron ore, charcoal or coke (coke is charcoal made from coal) and limestone (CaCO3­). Huge quantities of air blast in at the bottom of the furnace, and the calcium in the limestone combines with the silicates to form slag. Liquid iron collects at the bottom of the blast furnace, underneath a layer of slag. The blacksmith periodically lets the liquid iron flow out and cool.

At this point, the liquid iron typically flows through a channel and into a bed of sand. Once it cools, this metal is known as pig iron. To create a ton of pig iron, you start with 2 tons (1.8 metric tons) of ore, 1 ton of coke (0.9 metric tons) and a half ton (0.45 metric tons) of limestone. The fire consumes 5 tons (4.5 metric tons) of air. The temperature at the core of the blast furnace reaches nearly 3,000 degrees F (about 1,600 degrees C).

­Pig iron contains 4 to 5 percent carbon and is so hard and brittle that it's almost useless. If you want to do anything with it, you have three options. First, you can melt it, mix it with slag and hammer it out to eliminate most of the carbon (down to 0.3 percent) and create strong, malleable wrought iron. The second option is to melt the pig iron and combine it with scrap iron, smelt out impurities and add alloys to form cast iron. This metal contains 2 to 4 percent carbon, along with quantities of silicon, manganese and trace impurities. Cast iron, as the name implies, is typically cast into molds to form a wide variety of parts and products.

­The third opt­ion for pig iron is to push the refining process even further and create steel, which we'll examine on the next page.

Between the 15th and 20th centuries, some countries had an industrial leg up on the competition due to the availability of iron ore deposits. For example, China, India, England, the United States, France, Germany, Spain and Russia all have substantial iron ore deposits. When you think of the historical importance of all of these countries, you can see the correlation!