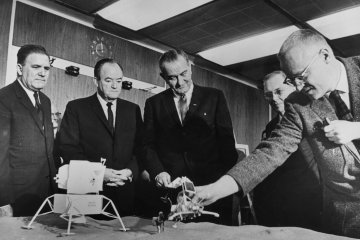 At the apex of the space race, two superpowers duked it out for supremacy amongst the stars. In opposite corners, the USSR and United States worked feverishly to perfect their spacecraft and find a way to land men on the moon. Only one would emerge as the victor. And only one of them was led by a hard-nosed, politically-savvy man named James E. Webb, who harnessed the power of NASA and propelled the organization to (literally) never-before-seen heights.

Webb is best known as the second director of NASA. He oversaw the organization from 1961 until 1968, and is universally credited for some of NASA's most epic successes, including the Apollo program.

He was born in October 1906 and died at age 85 on March 29, 1992. In his eight-plus decades on Earth, Webb led a dynamic and forceful life in both corporate entities and government agencies.

It all started for Webb when he became a Marine Corps pilot in the early 1930s. After his stint in active duty, he earned his law degree from George Washington University.

He worked in public service, first becoming secretary for Rep. Edward W. Pou and then for O. Max Gardener. From 1936 to 1943, he worked at Sperry Gyroscope Corp., where he ascended to vice president before returning to the Marines for WWII.

Once the war subsided, he renewed his career in law and then served as Budget Bureau director and then undersecretary of state. His path then led to corporations involved in advanced technologies, such as Kerr-McGee Oil Industries and McDonnell Aircraft. Immediately before being appointed director of NASA, he worked for the Oak Ridge Institute of Nuclear Studies.

Webb was clearly a well-connected and ambitious man. Those traits were assets as he took the helm of NASA during the Kennedy administration. John F. Kennedy placed huge political and personal capital in the fledgling space program, using visions of space glory to capture the imaginations and support of millions of American citizens.

Webb then, was personally responsible for fulfilling JFK's grandest dreams. The president's directive to him? Put a man on the moon, and do it before anyone else. For Webb, it was the challenge of a lifetime. 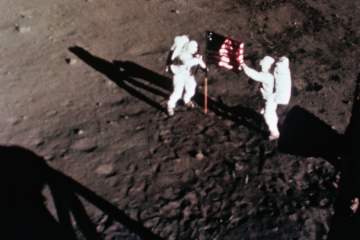 While Webb wan no longer helming NASA when Neil Armstrong and Buzz Aldrin planted an American flag on the lunar surface, he deserves a great deal of credit for the success of the mission.
© NASA/Roger Ressmeyer/CORBIS

As the new director of NASA, Webb worried his employees. He wasn't a space geek or engineer. He was, however, a masterful planner and motivator.

He reengineered NASA from a loose confederation into a more tightly managed and focused group -- no small task for a sprawling organization comprised of more than 30,000 people plus hundreds of thousands of contractors.

President Kennedy made his famous promise for a manned lunar landing in May 1961. From that point on, Webb's main goal was to land an American astronaut on the moon before the Russians.

Yet notably, in spite of sky-high challenges of the Apollo missions, Webb continued work on other aspects of space exploration, including the Pioneer and Mariner programs. All of these programs saw significant advancement during his oversight.

Webb was well-known for his stubbornness, but he had a firm grasp on effective personnel management and picked up on engineering details, too.

His political might was substantial. He conversed frequently and frankly with the president. And when called before Congress (a frequent occurrence) he alternately impressed and bamboozled political foes.

Those skills came in particularly handy after the Apollo 1 accident in 1967, in which three astronauts died in a cabin fire during a rehearsal. Webb survived the finger pointing from Congress, and just as important, kept the Apollo program on track.

He resigned in 1968, only three days before the launch of Apollo 7. Although he wasn't officially in charge of NASA when the Apollo 11 mission delivered the first humans onto the surface of the moon, he's fully credited with guiding the organization to its most glorious moment.

After he resigned from NASA, Webb took up a few other jobs and projects with organizations such as National Geographic and the Smithsonian. He developed Parkinson's disease but ultimately succumbed to a heart attack.

In honor of their most stalwart leader, NASA named a huge project after him: The James Webb Space Telescope. This is unique in that it breaks the NASA convention of naming ventures after scientists, rather than administrators, but Webb's vision to do more than just put the U.S. on the moon – to foster the organization's investment in science and research beyond that one huge goal – was incredibly impactful.

Projected for a 2018 launch, the JWST is considered the successor to the Hubble Telescope and could lead to all sorts of new insights into how our universe works -- a fitting tribute for a man who worked his hardest to reach the heavens in all sorts of new ways.

Author's Note: Who was James Webb?

Before JFK and James Webb, NASA was still feeling its way along, looking for a way forward in the exploration of space. Thanks to one president's vision and a forceful NASA director, the new space agency pulled off some of the most amazing feats in the history of humanity. We all have James Webb to thank for his work in those efforts.

Could a gamma-ray burst wipe out all life on Earth?
Just Four Dimensions in the Universe, if You Believe Gravitational Waves
Total Solar Eclipse on Aug. 21, 2017: When, Where and How to See It