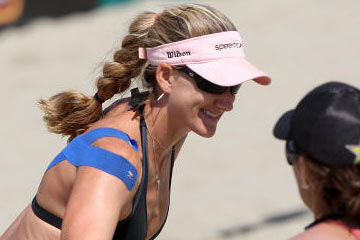 Healthy skeletal muscles are essential to keeping you moving at your best. A strained or injured muscle or tendon can make you feel slower or weaker than normal. If you're an athlete or work in a profession that requires physical labor, keeping your body free of tension and pain is essential for peak performance. Today, innovative devices and techniques to help protect and treat your muscles, tendons and joints have come out of research in kinesiology, the science behind muscular and skeletal movement.

Athletes, both professional and recreational, have used many methods to treat sore or injured muscles, from pain pills and topical creams to massage therapy and acupuncture. Treatments have improved over time as scientists have learned more about how muscles work. While traditional treatments restricted movement to injured muscles, today we know that keeping muscles moving and improving circulation reduce pain and speed healing. That's the science that inspired the father of kinesiology taping, Japanese chiropractor Dr. Kenzo Kase, to develop a muscle treatment in 1979 that he named the Kinesio Taping Method. This taping method gently lifts the layer of skin and attached tissue covering a muscle so that blood and other body fluids can move more freely in and around that muscle.

Dr. Kase developed both the method and the first elastic therapeutic tape, Kinesio Tape. He also founded Kinesio, the company behind the product, in the 1980s, and formed the Kinesio Taping Association (KTA) in 1984. Kinesio USA, LLC, began operating in 1994, headquartered in Albuquerque, New Mexico [source: Domrzalski].

In the fourth edition of his book "Illustrated Kinesio Taping," Dr. Kase explains that for the first 10 years of Kinesio Taping history, the method was primarily used alongside other therapies by orthopedists, acupuncturists and chiropractors like him. Kase says that a patient with articular disorders, affecting the joints, was the first to be treated using Kinesio Taping [source: Kase].

This article unrolls the facts about kinesiology tape, from its technology and benefits to important tips on how to use it. Let's start with what it's made of and why.

The Technology behind Kinesio Tape

Let's start by looking at the basic function of kinesiology tape. This is not your ordinary athletic tape. Traditionally, athletes or others with muscle injuries would tape a muscle or joint to restrict motion and prevent further injury. Imagine a strained calf muscle. Old-school taping methods would dictate wrapping tape around the entire lower leg -- calf, shin, tibia, fibula and all -- almost like a mummy. While that would prevent further strain by immobilizing the injured muscle, it would also impede circulation and slow down the body's natural healing process. Kinesiology taping takes the opposite approach, using the tape to open up the muscle and allow full movement. Kinesiology tape is applied on top of an injured or strained area to stabilize it, but care is always taken to ensure that a muscle or tendon is never encircled with a ring of tape. As you move, the tape, skin and connective tissue (or fascia) over the muscle or tendon also move, pulling slightly away from the muscle and creating space for lymphatic fluid to flow around and cleanse the inflamed tissue.

Dr. Kase lists the following as the four major functions of Kinesio Taping. These functions drive the technology behind the tape:

To ensure a full range of motion for the wearer, Kinesio Tape is very thin and made with a porous cotton fabric. The fabric lets the skin breathe and has an elasticity comparable to that of the skin and muscles. The sticky side of the tape uses a water-repellant, medical-grade acrylic adhesive that further supports the muscles and connective tissues. In addition, the tape can stay put for three to four days even through sweating and showering, and Kinesio makes a waterproof tape for use on hands and feet [source: Allegro].

The brand name Kinesio Tape comes in rolls between up to three inches wide and 16 to 103 feet in length, and is available in beige, black, blue and red (which looks more like hot pink). Though a single roll can seem a bit pricey -- a 16-foot (4.8 meter) roll of tape runs around $33 -- you can find deals online that cut the price nearly 65 percent. Later, we'll look at some of Kinesio's competition and see whether those products are suitable substitutes when using Dr. Kase's Kinesio Taping Method.

Now that you know that kinesiology tape is designed to do, let's take a closer look at the Kinesio Taping Method.

Sticking On a Disclaimer

As you read on, note that we're not dispensing medical advice in this article. You should consult your doctor to determine if Kinesio Taping is an appropriate treatment for any muscle or tendon injuries you have. If you plan on taping yourself, you should also supplement this article with other resources to learn the appropriate taping techniques to address your specific needs. 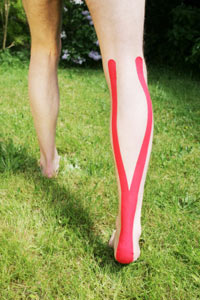 Achilles tendonitis is often treated with kinesiology tape. Note that the tendon is supported, instead of wrapped.
©iStockphoto.com/Jan-Otto

Before you attempt taping, get informed. Even if you're familiar with the muscles you're treating, applying the tape incorrectly could do more harm than good. Dr. Kase's book contains instructions and thorough illustrations for taping everything from the scalenus anterior in the neck to the flexor hallucis brevis in the foot. Kinesio Taping experts, like athletic trainer Carrie Hendrick, Ph.D., of Asheville, N.C., recommend visiting kinesiotaping.com and finding a Certified Kinesio Taping Practitioner (CKTP) in your area. To become a CKTP, Hendrick trained at two seminars given by the Kinesio Taping Association International (KTAI) and successfully completed an online exam. CKTPs and other experienced taping experts often give talks and demonstrations on taping at health and fitness expos around the world [source: Hendrick].

Next, select your kinesiology tape. Dr. Kase recommends that the elasticity of tape used in Kenesio Taping has a stretch potential between 130 and 140 percent of its original length. The Kinesio brand tape has a certain amount of stretch to it even before you remove the paper backing. Expect a five to 10 percent stretch in Kinesio Tape when you apply it gradually, rolling off the paper as you go. When shopping for other brands of kinesiology tape, look for similar percentages of potential stretch.

Prior to placement, you need to cut your tape to the correct length and shape. A straight cut, perpendicular to the length of the tape, creates an "I" strip. Other cuts include "X," "Y," and "fan" shapes. The instructions for the specific muscle group you're treating indicate the shape you'll need and how to cut it. To measure the proper length, simply hold the tape up to the area you're taping.

When you're ready to make contact, clean the skin of dirt, oils and lotions to maximize adhesion. Then, go back to those instructions for information on how to peel the back off based on the shape of the tape and proper technique for applying it. One tip is that if you have to peel off the backing all at once, do so slowly to make sure the lightweight strip doesn't fold back on itself. Another pointer: If you have to stick the tape in a temporary position, don't press or rub the tape at that spot -- you'll activate the adhesive and make it difficult to move to its final position.

Dr. Kase describes the two directions you can apply the tape and the importance of choosing the correct direction:

When you've placed the tape in its final position, rub the tape for a few seconds to activate the adhesive and ensure it stays put. After an hour, the adhesive sets and seals, and should be adhered enough to stay put for three to four days through all your daily activities, including exercise and showering.

Benefits and Challenges for Kinesio Tape 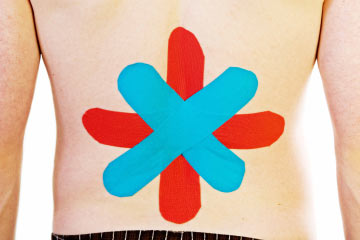 One challenge for using kinesiology tape is that you can't always apply it correctly by yourself, such as getting to those hard-to-reach places on your back.
©iStockphoto.com/Jan-Otto

So what have we discovered about kinesiology tape so far? We know the purpose of using kinesiology tape is to improve circulation, support muscles and help heal and prevent muscle injury. Its primary benefit over traditional athletic tape is that it's designed to allow freedom of movement and flow of body fluids to speed the healing process. We've also learned that kinesiology tape is sweat-proof, so it won't give way in the middle of an intense workout, and it can get wet, so you can wear it in the shower or pool.

Athletic trainer Carrie Hendrick, who you read about earlier, confirms that a kinesiology tape application will last three to five days, and that most of the athletes she treats notice a change in the treated area within 24 hours. When she removes the tape, she gives the area a break for a day or two before applying more tape, if another treatment is needed [source: Hendrick]. Kinesio brand tape is hypoallergenic and latex-free, so it shouldn't irritate the skin during treatment, and is safe for users with latex allergies.

Perhaps the biggest challenge in using kinesiology tape is that you can't always use it correctly by yourself. If you're treating muscles in your back, for example, getting the correct tape placement could be difficult, if not impossible, on your own. If the muscles you're treating are difficult to reach, consider getting a kinesiology tape buddy who's willing to learn to help apply the tape properly.

Another important consideration when using kinesiology tape is which brand to choose. Kinesio holds a patent for its manufacturing process, and it owns the trademarks for the Kinesio brand and Kinesio Taping. Competitors have engineered tape with very similar qualities to Kinesio Tape, though, and claim to offer the same function. Kinesio has a significant advantage, though, in that it is the only producer of kinesiology tape to offer training from certified professionals on how to use it properly. Hendrick herself prefers the Kinesio brand because it stays on the longest, and she dislikes the pre-cut tapes because it's important to customize the length of tape for the athlete being treated, whether it's a short gymnast or a tall basketball player [source: Hendrick].

Kinesio's competitors continue to find new ways around the red tape, so to speak. For example, K-Active Tape allegedly took advantage of inside knowledge of the manufacturing process by using the same manufacturing facility as Kinesio in Japan. Kinesio has 50 competitors around the world, 20 in the U.S. alone, and spends hundreds of dollars per hour each time they have to consult their lawyers about another trademark violation [source: Domrzalski].

One Kinesio competitor, RockTape, has taken the technology one step further. Though Kinesio Tape was developed primarily for use by medical professionals and was later adopted by athletes, RockTape engineered its product specifically for use during athletic competition. RockTape boasts a 190 percent stretch with the use of a specialized nylon, which is both highly flexible and very water-resistant [sources: RockTape, PTS]. RockTape has also developed a topical muscle pain reliever called Rock Sauce designed to use with its tape. Rock Sauce is similar to, but supposedly more powerful than, products like BioFreeze and Ben Gay [source: RockTape].