A Case Study: Using Laser Analysis to Study a Painting 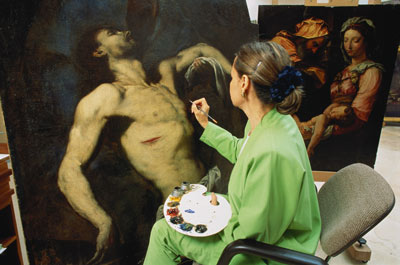 Works of art don't necessarily age gracefully, so conservators may be enlisted to painstakingly restore paintings, such as "Pieto" by Jose Ribera. Laser analysis, can eliminate some of the guesswork in art restoration.
Robert Frerck/­Getty Images

To understand how laser analysis can be used in a very practical way, consider a museum that owns a valuable, 18th-century, oil-on-canvas painting. Over the years, several well-intentioned conservators and patrons have made restoration attempts, adding new layers of paint to the artist's original work. In addition, dirt and smoke have adhered to the painting surface, which has an overall darkening effect. Now the masterpiece looks dull and lifeless. The museum decides to conduct an analysis of the painting to both understand its restoration history and to return it to its former glory.

­In a normal cleaning process, various cleaners and varnish removers are applied to a painting to strip away everything above the original artwork. Conservators use cotton swabs to apply these solvents, working slowly and with great care to make sure they don't remove too much material. But because it's difficult to tell one layer from the next, some of the original pigment is inevitably lost. Our museum owners would like to avoid this problem if they can. They've heard about a revolutionary new technique -- laser-induced breakdown spectroscopy -- and decide to try it.

The painting is taken to an off-site conservation facility that includes LIBS hardware and instrumentation. Inch by inch, the painting is analyzed. As the laser ablates some of the surface material and the spectrometer studies the emissions produced by the plasma plume, the chemists working in the lab can determine exactly what molecules are present. For example, when they analyze a section with white paint, they learn that two different pigments are present. One contains lead, while the other contains titanium. Titanium white wasn't commercially available until after 1920, so they know that the titanium application came later as part of a restoration. Not only that, the lab workers can tell precisely where one layer ends and the next begins simply by noting the change in the spectral emissions.

In reality, museums are just beginning to experiment with LIBS and usually on small, hidden sections of a canvas. But in the near future, they will be able to use the technology to both analyze the painting and restore it completely. In such a situation, a conservator will remove paint and dirt layer by layer until he or she reaches the artist's original artwork.

­Dentists are also beginning to experiment with LIBS, using laser analysis to determine exactly where a ­cavity ends and healthy tooth enamel begins. And quality control engineers in aluminum manufacturing plants are adopting laser analysis techniques to ensure alloys have precisely the right proportion of constituent metals. Archaeologists and forensic scientists are finding the technology invaluable, as well. In fact, laser analysis is proving that the laser, almost 50 years old, is not a solution in search of a problem, but a powerful tool that can help answer a number of questions.