The Laser as Analytical Tool 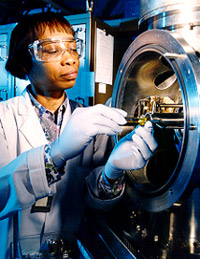 Take a break from reading for a moment to survey your immediate surroundings. You can clearly see solid objects, such as your computer, desk and printer. Liquids -- the soda in your glass and the water in your aquarium -- are just as clearly visible. Even materials that seem invisible, such as odors and air currents, can be detected by other senses. All of this "stuff" -- what scientists call matter -- is composed of molecules, or combinations of atoms. Analytical chemists like to break apart molecules into their constituent atoms or just know what molecules or atoms make up a particular substance.

­Over the years, analytical chemistry has yielded several tools and techniques. Some of these tools and techniques are qualitative in nature: They identify the elements or compounds present in a substance, what chemists call analytes. Other techniques are quantitative: They actually measure the amounts of some or all of the analytes. In either case, the chemical analysis involves stimulating a sample with light, electricity or a strong magnet to cause a change in the sample that will reveal its chemical makeup.

Take mass spectrometry, a tried-and-true analytical technique. Suppose a biologist wants to know what toxins are present in contaminated fish. She could take a very small piece of muscle tissue from the fish and dissolve it in a liqui­d solvent. Then she could place the liquid in the reservoir, or inlet, of the mass spectrometer. From there, the liquid leaks into an ion chamber, where it's bombarded with a beam of electrons. This bombardment converts the atoms and molecules in the sample into electrically charged particles known as ions. The biologist then uses electric or magnetic fields to separate the various ions according to their mass or electric charge, thus revealing the specific toxins, such as DDT, present in the fish.

In recent years, the laser, which is used as the stimulating agent, has become a valuable tool in chemical analysis. The various laser-based techniques used to analyze substances fall roughly into two categories: optical and nonoptical detection methods.

For instance, one nonoptical laser analysis technique actually lets scientists "hear" different elements. It's known as pulsed-laser photoacoustics, and it involves directing a laser onto a sample. As the sample absorbs energy from the laser, it heats up and expands, creating an acoustic pressure wave. A piezoelectric transducer, which converts mechanical vibrations into electrical pulses, listens to the waves and helps chemists identify molecules in the sample.

Ion mobility spectrometry, or IMS, is another nonoptical method. In IMS, a laser first ablates, or cuts, minute particles from the sample surface before ionizing the material. Ions created by laser-blasting the sample are introduced into a fast-moving stream of gas. Scientists measure how quickly the ions move through the gas stream, which is affected by the size and shape of the ions.

­Laser analysis based on optical detection methods is called laser spectroscopy. Spectroscopy involves stimulating a sample and then analyzing the resultant spectrum -- the range of electromagnetic radiation emitted or absorbed. Spectroscopy is so vital as an analytical tool that it warrants a closer look. On the next page, we'll get into the basics of spectroscopy to understand how the electromagnetic signature of every element can act like a fingerprint.