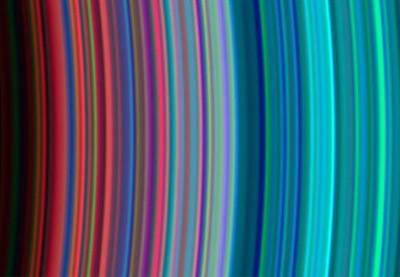 An ultraviolet imaging spectrograph took this picture of Saturn's C rings (left) and B rings (right). The red bands indicate "dirty" particles while cleaner ice particles are shown as turquoise in the outer parts of the rings.
NASA/JPL/University of Colorado

In laser spectroscopy, chemists train a laser beam on a sample, yielding a characteristic light source that can be analyzed by a spectrometer. But laser spectroscopy falls into several different schools, depending on what kind of laser chemists favor and which aspect of an atom's excited response they study. Let's look at some of these more closely.

Name­d after the Indian scientist who discovered it, C.V. Raman, Raman spectroscopy measures the scattering of monochromatic light caused by a sample. The beam from an argon-ion laser is directed by a system of mirrors to a lens, which focuses monochromatic light onto the sample. Most of the light bouncing off the sample scatters at the same wavelength as the incoming light, but some of the light does scatter at different wavelengths. This happens because the laser light interacts with phonons, or naturally occurring vibrations present in the molecules of most solid and liquid samples. These vibrations cause the photons of the laser beam to gain or lose energy. The shift in energy gives information about the phonon modes in the system and ultimately about the molecules present in the sample.

Fluorescence refers to the visible radiation emitted by certain substances because of incident radiation at a shorter wavelength. In laser-induced fluorescence (LIF), a chemist activates a sample usually with a nitrogen laser alone or a nitrogen laser in combination with a dye laser. The sample's electrons become excited and jump up to higher energy levels. This excitation lasts for a few nanoseconds before the electrons return to their ground state. As they lose energy, the electrons emit light, or fluoresce, at a wavelength longer than the laser wavelength. Because the energy states are unique for each atom and molecule, the fluorescence emissions are discrete and can be used for identification. ­

­LIF is a widely used analytical tool with many applications. For instance, some countries have adopted LIF to protect consumers from pesticide-tainted vegetables. The tool itself consists of a nitrogen laser, a sensor head and a spectrometer, all packaged in a small, portable system. An agricultural inspector directs the laser­ on a vegetable -- lettuce leaves, let's say -- and then analyzes the resulting fluorescence. In some cases, the pesticides can be identified directly. In other cases, they must be identified based on how they interact with chlorophyll, the green pigment present in all leaves. ­

Laser ablation inductively coupled plasma optical emission spectroscopy (LA-ICP-OES) has a ridiculously complicated name, so let's start with ICP, which is the heart of the analytical technique. The "P" in ICP stands for plasma, an ionized gas consisting of positive ions and free electrons. In nature, plasmas usually form only in stars, where the temperatures are high enough to ionize the gas. But scientists can create plasmas in the lab using something known as a plasma torch. The torch consists of three concentric tubes of silica surrounded by a metal coil. When an electric current passes through the coil, a magnetic field is created, which in turn induces electric currents in a gas, usually argon, allowed to pass through the silica tubes. This excites the argon gas and creates the plasma. A nozzle at the end of the torch acts as an exit for the plasma.

Now the instrument is ready to analyze a sample. In the laser-based version of ICP-OES, a neodymium-doped yttrium aluminum garnet (Nd:YAG) laser is used to cut, or ablate, a few microscopic particles from the sample's surface. That means analysis isn't limited to liquids -- solids are fair game, as well. The ablated particles are then carried to the pl­asma torch, where they become excited and emit light.

­Laser-induced breakdown spectroscopy (LIBS) is similar to LA-ICP-OES, except that the laser both ablates the sample and creates the plasma. Because LIBS has become increasingly popular in recent years, we're going to give it more attention next.