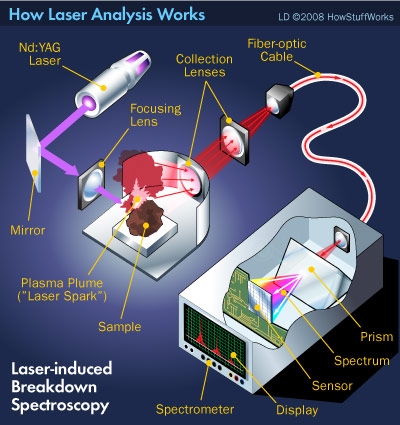 ­Laser-induced breakdown spectroscopy, or LIBS, has been advanc­ing significantly over the last decade. It can analyze solids, liquids and gases and can return results rapidly, with very little damage to the sample. Not only that, it can do its work from a distance, unlike some analytical tools that require samples being brought to a lab. For example, LIBS is being used to detect surface contaminants in a few nuclear reactors around the world. The laser in these systems is located several meters from the reactor surface and yet is still able to function effectively. These systems keep most of the instrumentation behind shielding material, with only a mirror and a lens (which are used to steer and focus the laser beam respectively) exposed to the nuclear radiation.

We'll consider other practical applications of LIBS in a moment, but how exactly does it work? Like LA-ICP-OES, LIBS uses a laser to cut tiny particles from the surface of a sample. But in LIBS, the laser itself creates the plasma instead of a plasma torch. Let's take a look at the four major parts of a typical LIBS system and how they work. The diagram above shows a schematic of the setup.

­LIBS has several benefits. Because the sample requires no special preparation, the process is relatively simple and inexpensive. Not only that, LIBS can be used to determine the elemental composition of any sample, unlike certain techniques that are great at analyzing solids, but not liquids and gases. Even very hard materials are fair game because the lasers carry so much energy. But one of the greatest benefits of LIBS is its ability to provide information without destroying the sample. The laser removes less than a milligram of material, which is practically invisible. As we'll see on the next page, this makes LIBS an ideal solution for analyzing valuable items, such as paintings or archaeological artifacts.