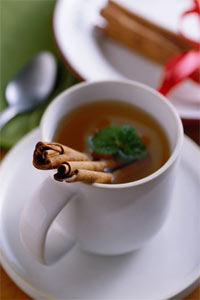 In the West, cinnamon is most often used in sweet dishes and hot drinks, such as tea.
Janis Christie/ Digital Vision/Getty Images

Cinnamon's most obvious characteristic is its pungent taste and smell. This is due to the presence of cinnamaldehyde, which makes up about 60 percent of cinnamon's bark oil. Cinnamaldehyde is the primary compound in cinnamon essential oil, which is produced by distilling the bark of a cinnamon tree [source: University of Bristol].

People have used cinnamon in cooking for thousands of years. Traditionally, it was used to flavor meat and curry dishes in the East. In the West, it's more typical to find the spice in sweet dishes and desserts, such as cinnamon buns and apple pies, or added to hot drinks such as tea, cocoa or cider. Some people even serve teas or hot chocolate with a cinnamon stick as a replacement for a spoon -- as you stir, the heat of the drink slowly dissolves the quill. Ceylon cinnamon is favored for this type of use, since it is milder and sweeter than the cassia variety.

To preserve cinnamon's freshness and flavor, try storing it in an airtight container. Glass is best, since it's unlikely to interfere with the flavor of the spice. Cinnamon sticks should stay fresh for about a year when stored this way, but ground cinnamon typically loses its strength more quickly.

Studies have shown that the essential oil of cinnamon can make an effective, environmentally friendly pesticide, since it has a proven ability to kill mosquito larvae [source: Gorss]. It may work as a repellent for adult mosquitoes, too, but you should dilute this substance before putting it directly on your body. Pure cinnamon oil might irritate your skin or cause allergic reactions.

Not of all of cinnamon's effects on the body are negative, however. Read on to find out how this spice may improve your health.