History and Culture of Cinnamon 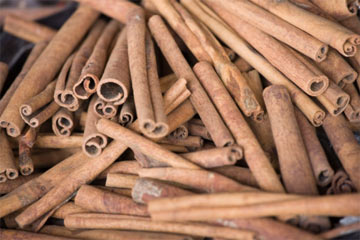 Cinnamon became one of the most profitable spices in the spice trade during the 16th and 17th centuries.
Fraser Hall/ Photographer's Choice RF/Getty Images

It's difficult to know exactly how long people have known of cinnamon, but there are some early written records of its use. The Christian Bible mentions cinnamon at least a couple of times -- when Moses uses it as part of anointing oil, for example. Some experts say that Egyptians also used the spice for many tasks -- such as embalming -- that may seem unusual, considering its current reputation as a kitchen item. Europeans used it both to add flavor to food and for certain religious rites [sources: Indian Institute of Spices, Britannica: Cinnamon]. Many accounts say that the Emperor Nero added a large amount of cinnamon to the funeral pyre for his wife, Poppaea Sabina, in 65 AD, in order to mask the scent of her body burning [sources: Klein, Osborne]. This was a common technique used at funerals in ancient Rome.

During the Middle Ages, Europeans began to regard cinnamon as a kind of status symbol, the reasoning being that only a very wealthy person could manage to obtain an exotic spice from the East. However, many scholars believe that, bragging rights aside, well-to-do Europeans needed the spice for a very practical reason: They used it to cover up the smell of cured meat, which often spoiled during the winter [source: Osborne]. Even then, however, some people believed that cinnamon had curative powers, too, and used the spice to treat conditions such as indigestion.

Cinnamon, along with spices like clove and nutmeg, eventually played a key role in Europe's expansion into Asia, as well. By the 17th century, cinnamon had become the most profitable spice in the Dutch East India Company trade [source: Britannica: Cinnamon]. Today it may not be as well known for its economic impact, but cinnamon is still a popular, perhaps essential, staple in most contemporary kitchens.

To find out lots more information on cinnamon, follow the links below.