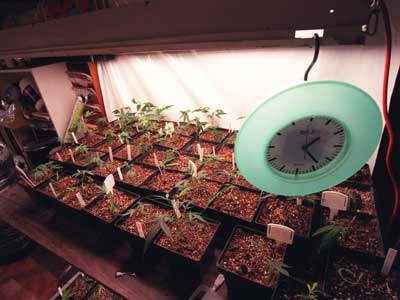 Cultivating indoor cannabis requires a lot of time, labor and money. You'd encounter many of the same kinds of costs if you decided to stuff a suburban home with zucchini plants. The difference, of course, is that law enforcement agencies aren't going to waste tens of millions of dollars in an effort to snuff out clandestine zucchini growing operations. Marijuana growers spend a great deal of money just keeping their operations hidden from prying eyes.

While some grow houses operate in secluded rural areas, many thrive in the close confines of suburban communities. In either case, growers need their facilities to look, sound and smell like just another dwelling. They have to make sure outward appearances don't tip anyone off, which means making sure the house looks more like someone's home and less like a dope factory. This ca­n entail everything from waiting until the least suspicious times to transport goods to buying yard gnomes. ­

Even if everything looks sound, growers still have to worry about the neighbors' noses. Marijuana has a strong, distinctive odor -- and hundreds of plants smell even stronger. To combat this threat, growers either use charcoal filters for outgoing air or maintain a closed growing environment. With the latter method, growers seal plant areas off from the outside world with plastic and nurture the plants with CO2­ from tanks or natural gas burners.

Effectively sealed off from the five senses, you might think the crops would be safe at this point. But law enforcement has two key allies in the war on drugs: water and power companies. A house with 1,000-watt electrical lights, constant air conditioning and an array of pumps, filters and monitoring equipment will generate quite a power bill. When electric companies notice unreasonably high power usages or patterns of use that fall in line with grow house light cycles, they go straight to the authorities. These conditions leave two options for grow house operators: either make your own electricity or steal it.

Gas-powered generators allow growers to either supplement legitimate power usage or provide all the electricity for lighting. It takes about 80 kilowatts to keep a 50-light grow room burning [source: Cannabis Culture]. Generators capable of meeting these demands typically run between $10,000 and $20,000, along with fuel costs. Generators bring the added risk of mechanical malfunction and fire, as well as the demand for frequent and possibly suspicious fuel purchases. Plus, if you've ever heard a generator, you know even the small models make a lot of noise. While the constant roar of a gas motor might fly in a secluded, rural setting, suburban neighbors would probably grow irritated and suspicious in no time. But with enough soundproofing and proper ventilation, some growers are able to maintain generators in insulated basement areas.

In order to steal power, marijuana growers either tamper with power meters or reroute incoming electricity around them. Both of these methods bring with them the risk of fatal electrocution and detection by power line inspectors. Some grow house operators cut down on the risk by employing former or even current power company workers to commit these crimes. They steal water in similar ways, such as drilling holes through the paddles that measure water flow into a home.

If the bill for indoor pot farming seems astronomical, then just hold on. We haven't even looked at what goes into manning a grow house.