by Alia Hoyt
Unlike most flowers, orchids combine male and female sex organs on one column. (c) 2015 HowStuffWorks

If exotic floral flair is what you're after, orchids are the way to go. With more than 25,000 species spanning about 80 million years in existence, orchids are arguably one of the most beautiful, even intelligent, families of flowering plants in existence [source: Pollan]. Indeed, the ability of these perennials to adapt and evolve has made them surprisingly hardy for such a seemingly delicate bloom, with a major presence on every continent except for Antarctica (sorry, penguins!) Although they do grow and thrive in cold climates, the most brilliant varieties of orchids prefer a more tropical setting like South or Central America.

Orchids by their very makeup have bilateral symmetry, meaning that one side of a flower is a mirror image of the other, just like a human face. People appreciate those clean lines of symmetry, making them more likely to admire the beauty of the bloom [source: Kramer].

Describing the typical orchid is kind of like describing a "normal" human being. Their characteristics vary so widely across the family that they're impossible to pigeonhole. Size options alone make them unique: They range from as tiny as a pin to as large as a dinner plate! Looking for a specific color? Pick a shade, any shade — there's an orchid species somewhere in that hue. Possible shapes are endless. Some orchids bear striking resemblances to animals like monkeys, lions, doves and ducks!

Anatomically speaking, however, a typical orchid consists of a reproductive column, three petals placed in a whorl and three sepals (the usually green, leafy parts of the flower that enclose the bud). One of the petals, known as the labellum or lip, is extra fancy in appearance because its purpose is to entice insects to visit and encourage pollination. In particular, the orchid column is innovative because it combines both female and male sex organs within a tube-shaped edifice, rather than these organs existing separately, as is the case with most other types of flowers [sources: Landscape-and-garden, AMNH, Smithsonian Gardens].

Beautiful, smart and diverse? No wonder orchids are incredibly popular! 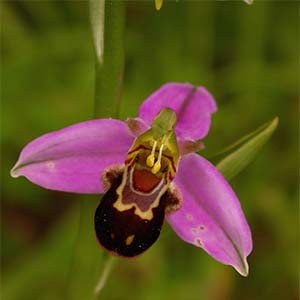 In order to pollinate, the Ophrys apifera, aka the “prostitute orchid,” copies the scent and appearance of the naughty bits of female bees to attract males ones.
Lars Hallstrom/age fotostock/Getty Images

I mentioned earlier that orchids are pretty smart, as flowers go. Although they probably won't ever learn advanced calculus or overtake man as rulers of the world, they have evolved in some pretty cool ways to ensure that they continue to spread and grow. You probably know that flowering plants rely on pollination by insects to spread their genetic material. Most plants offer sweet, sweet nectar as bait, as do some types of orchids. Other varieties, however, have developed their own means for luring pollen-spreading insects. Here are a few cool examples of super sneaky orchids:

Bulbophyllum beccarii: This is a classic case of an orchid that knows its audience. Since its pollinators are flies and carrion beetles, it caters to their preferences by stinking to high heaven in order to attract them. In fact, one writer likened it to "a herd of dead elephants" [source: Horak]. Probably not the best type to give at a housewarming party.

Ophrys apifera: Also known as "prostitute orchid" or "bee orchid," this European version effectively copies the scent and appearance of the naughty bits of female bees to attract males. Then, once the bad boy bee attempts a tryst, the flower transfers pollen sacs to his back, which he distributes when he flies off in search of a cold shower or a more willing mate [sources: Pollan, Horak]. For the record, these orchids don't discriminate against other types of insects. The Ophrys insectifera (or "fly orchid") is perfectly happy to be a tease to flies around Europe too [source: Thornes].

Dendrobium sinese: Ever wondered what a frightened bee smells like? If so, grab one of these orchids and sniff away to find out. Hornets are the pollinator of choice for these Chinese beauties, and hornets enjoy nothing more than a nice bee buffet. So by smelling like scaredy-cat bees, these orchids actually attract hornets in search of a bee-flavored meal [source: Owen].

Vanilla planifolia: Yep, you read that right. The stuff of culinary tastiness is actually harvested from the vanilla plant, which is – drumroll please – a type of orchid! Boggles the mind, right? The flavor doesn't come from the bloom, however. Vanilla plants feature pods (known interchangeably as beans), which when cracked open reveal thousands of teeny black seeds. To ensure enough vanilla beans to meet worldwide demand, they have to be hand-pollinated [source: Spiegel]. See, I told you orchids are smart. This one has the humans doing all the work for it! 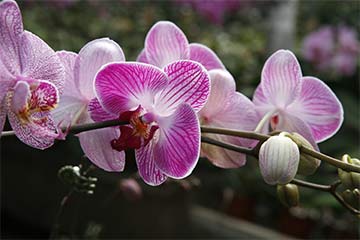 This is the most common type of orchid, the Phalaenopsis or moth orchid. Not surprisingly, it is easy to grow.
© Chuck Berman/ZUMA Press/Corbis

Although cultivating orchids isn't usually as simple as dropping a few seeds in the dirt, it's also not unreasonably difficult, either. You might want to start with an established plant or some cuttings, however, since certain varieties will have you waiting about 18 years if you start from seed! [source: Kirk].

The first step in growing orchids is to find one that suits your climate and capabilities. Tropical varieties simply aren't going to fancy the harsh Michigan winters, you know? A popular choice for novice growers are Phalaenopsis orchids, also known as moth orchids, but are much prettier than their nickname indicates. They're so popular and relatively easy to maintain that they can be purchased at many big box retailers, and require no fancy heating or lighting to thrive since they prefer to be raised in the same indoor climate that humans typically enjoy [source: Just Add Ice Orchids].

If you select a potted orchid, expect to find rock, peat moss, moss or bark in place of standard soil. This is because orchids found in nature actually don't grow in the ground, and instead root themselves on bushes, tree branches and trunks. Although this practice might seem parasitic, orchids don't take anything from their unwitting hosts or cause any sort of harm [source: American Orchid Society].

The American Orchid Society suggests moving potted orchids outside during the warmer months, typically to a patio or a spot underneath a tree. Doing so will actually improve their ability to grow and thrive, rather than keeping them cooped up year-round. As with many types of plants, the amount of water provided is critical to success. Avoid over- or underwatering your orchid by keeping tabs on the natural weight of the plant. In other words, you don't want it to be too heavy with water, or so light that it's dried out. Experts also recommend you water for about 15 seconds using lukewarm tap water, best done earlier in the day to ensure evaporation by the time the sun goes down. Then allow your plant to drain for 15 minutes, say over a kitchen sink [source: American Orchid Society].

It's also helpful to feed your orchid a diluted fertilizer on a weekly basis after watering because fertilizer applied to dry roots can be damaging. Some orchid enthusiasts advocate "watering" with a handful of strategically placed ice cubes, rather than standard H20. Others, however, warn against that practice, making the point that the roots of historically tropical plants aren't meant to encounter freezing temps [source: Flanders].

Orchid newbies might also make the grave error of assuming the plant is a goner after the blooms fall off. Don't be so quick to assign a time of death, though! Orchids are not like many common houseplants that look healthy year-round. Instead, they go through dormancy periods that allow the plant to relax and recharge for the next blooming session [source: Just Add Ice Orchids].

The sheer beauty, evolutionary capabilities and number of orchid species worldwide are fascinating enough to captivate both serious and amateur horticulturists, but the sexually charged reputation and exotic appearance of the blooms are why many others find them attractive.

Perhaps due to its wily, teasing pollination tricks (or the fact that the word "orchid" comes from the Greek word for "testicle") these beauties are often associated with sex, lending films, perfumes and other products bearing the name a certain air of mystery and sensuality [source: Encyclopaedia Britannica]. Case in point — the 1989 romantic/erotic drama "Wild Orchid," starring Mickey Rourke and Jacqueline Bisset. In fact, ancient Greeks regarded some types of orchids as aphrodisiacs [source: Oregon Orchid Society]. Seems like a great alternative for those of us who don't enjoy oysters!

Fascination with these beautiful flowers goes back at least as far as the Victorian era, during which aptly named "orchid hunters" ravaged South American habitats to bring them back to England for cultivation on the homefront [source: Oregon Orchid Society]. Even today, A-listers continue to covet orchids, as they are regularly found adorning the lapels of stars at movie premieres and as décor at fancy events.

Orchids have more than just beauty and brains on their side, however. Certain types have been used over the centuries for holistic medicine purposes, with the Chinese opting to serve them up in tea form to combat cancer and boost immunities. Others swear that orchids are helpful for treating gum disease and indigestion, and that they have antibacterial capabilities. Medical research has yet to validate these claims one way or the other [source: Just Add Ice]. Even if these claims are never proven, the smarts, sass and sex appeal of the orchid family is undeniable.

Orchids used to be fairly expensive and reserved for people with deep pocketbooks. Thanks to DNA and cloning technology, horticulturists now produce in the neighborhood of 100,000 affordable hybrid orchids! [source: Natural Garden].

For our next special occasion, I think I will gift my husband with a potted orchid. I mean, clearly he is smitten by exotic, otherworldly beauty! OK, OK – you can stop laughing now! I'll pick some dandelions from the front yard, instead.

How Pollen Works
Epically Tough Baobab Trees Dying Off in Africa
Is There Really a Cork Crisis?