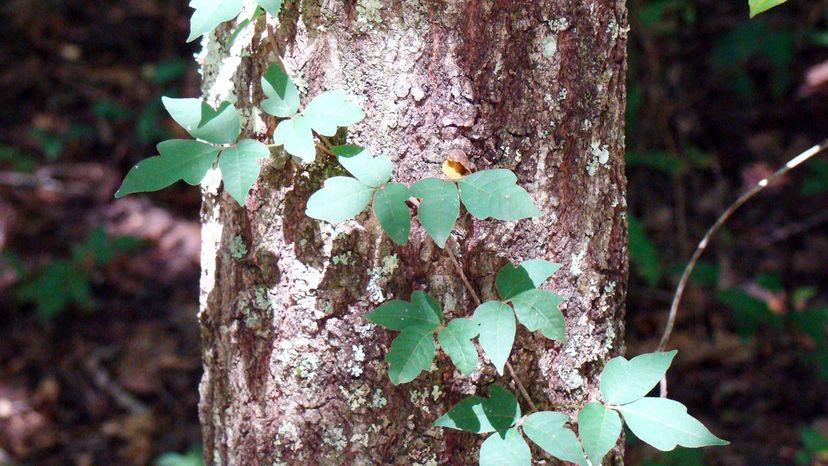 The leaves and stems of eastern poison ivy (Toxicodendron radicans) contain an oil, called urushiol, which can cause a red itchy rash or blisters several days after you touch it. Rebekah D. Wallace, Used Under Creative Commons (CC BY-NC 3.0 US)

According to the American Skin Association, as many as 50 million Americans have allergic reactions to the poison ivy plant each year. The plant is often very difficult to spot because it closely resembles several other common garden plants. It can also blend in with other similar looking weeds. But if you come into contact with it, you'll soon know because an itchy, blistery rash may form on your skin.

In this article, you'll learn where poison ivy grows, how to spot it before you get too close and how to get rid of it. And we'll explain why it causes that nasty, itchy rash. 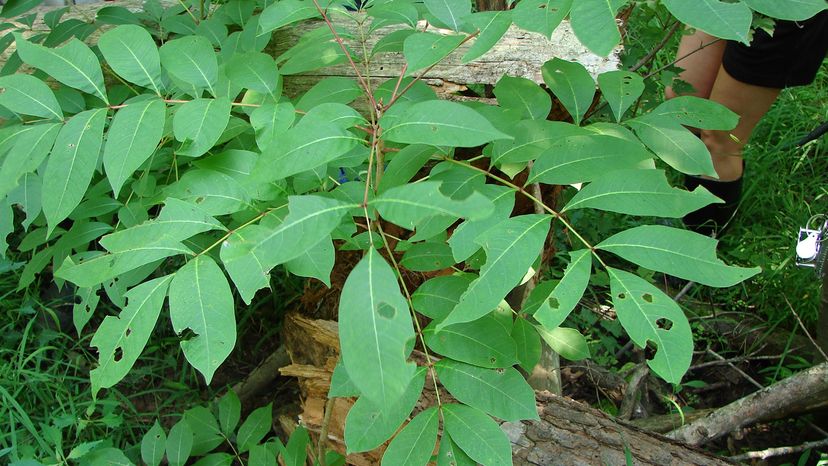 Poison ivy isn't the only plant that can cause a rash. Poison sumac, seen here, can also cause outbreaks. Troy Evans, Used Under Creative Commons (CC BY-NC 3.0 US)

Poison ivy causes a red, itchy rash caused by the plant that bears its name. Many people get it when they are hiking or working in their garden and accidentally come into direct contact with the plant's leaves, roots or stems. The poison ivy rash often looks like red lines, and sometimes causes blisters.

About 85 percent of people are allergic to the urushiol in poison ivy, according to the American Academy of Dermatology. Only a tiny amount of this chemical — 1 billionth of a gram — is enough to cause a rash in many people. Some people may boast that they've been exposed to poison ivy many times and have never gotten a rash, but that doesn't necessarily mean they're not allergic. Sometimes the allergy doesn't emerge until after being exposed several times, though some people develop a rash after their very first contact. It may take up to 10 days for the rash to emerge the first time.

Because urushiol is found in all parts of the poison ivy plant — the leaves, stems and roots— it's best to avoid the plant entirely to prevent a rash. Poison ivy grows almost everywhere in the United States (with the exception of the Southwest, Alaska and Hawaii). The general rule to identify poison ivy, "leaflets three, let it be," doesn't always apply. Poison ivy usually does grow in groups of three leaves, with a longer middle leaf — but it can also grow with up to nine leaves in a group.

Other ways to identify the poison ivy plant:

Poison ivy's cousins, poison oak and poison sumac, each have their own unique appearance.

Poison oak grows as a shrub and can reach 1 to 6 feet (.3 to 1.8 meters) in height. It is typically grows on the West Coast and in the South, in dry areas such fields, woodlands and thickets. Like poison ivy, the leaves of poison oak are usually clustered in groups of three. They tend to be thick, green, and hairy on both sides.

Poison sumac mainly grows in moist, swampy areas in the Northeast, Midwest and along the Mississippi River. It is a woody shrub made up of stems with rows of seven to 13 smooth-edged leaflets.

We'll look at how poison ivy affects the immune system in the next section.

Poison Ivy and the Immune System 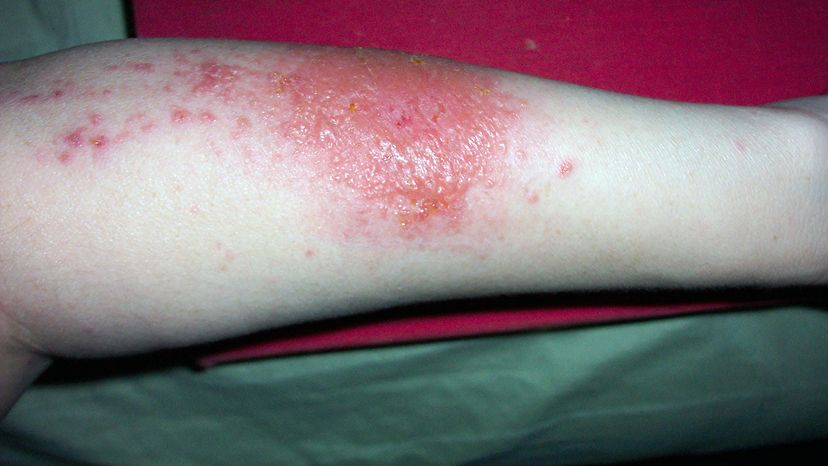 The body's immune system is normally in the business of protecting us from bacteria, viruses and other foreign invaders that can make us sick. But when urushiol from the poison ivy plant touches the skin, it instigates an immune response, called dermatitis, to what would otherwise be a harmless substance. Hay fever is another example of this type of response; in the case of hay fever, the immune system overreacts to pollen, or another plant-produced substance.

Here's how the poison ivy response occurs: Urushiol makes its way down through the skin, where it is metabolized, or broken down. Immune cells called T lymphocytes (or T-cells) recognize the urushiol derivatives as a foreign substance, or antigen. They send out inflammatory signals called cytokines, which bring in white blood cells. Under orders from the cytokines, these white blood cells turn into macrophages. The macrophages eat foreign substances, but in doing so they also damage normal tissue, resulting in the skin inflammation that occurs with poison ivy.

Most people don't have a reaction the first time they touch poison ivy, but develop an allergic reaction after repeated exposure. Everyone has a different sensitivity, and therefore a slightly different reaction, to poison ivy. Sensitivity usually decreases with age and with repeat exposures to the plant.

In places where your skin has come into contact with poison ivy leaves or urushiol, within one to two days you could develop a rash, which will usually itch, redden, burn, swell and form blisters. The rash should go away within a week, but it may last longer. The severity of the reaction often has to do with how much urushiol you've touched. The rash may appear sooner in some parts of the body than in others, but it doesn't spread; the urushiol simply absorbs into the skin at different rates in different parts of the body. Thicker skin such as that on the soles of your feet, is harder to penetrate than thinner skin on your arms and legs.

Call your doctor if you experience these more serious reactions:

Any of the following symptoms require immediate emergency medical assistance:

The quicker you treat poison ivy, the greater the odds that you can remove at least some of the urushiol before it gets into your skin, and you may be able to ward off a reaction. As soon as you notice that you've touched poison ivy (or poison oak or sumac):

Once the rash appears, you'll most likely be very itchy, but try not to scratch. Although breaking the blisters by scratching can't spread the rash, the bacteria under your skin can cause an infection and leave scars.

The rash should go away on its own within two weeks. If you're in a lot of discomfort, you can use wet compresses or soak the affected areas in water. You can also apply a topical corticosteroid or take an over-the-counter antihistamine (such as Benadryl) to relieve the itching. Prescription cortisone can stop the reaction, but only if it is taken soon after exposure. Other topical products that can soothe itching are calamine lotion, zinc oxide ointment, baking soda paste (3 teaspoons baking soda and 1 teaspoon water), or an oatmeal bath. 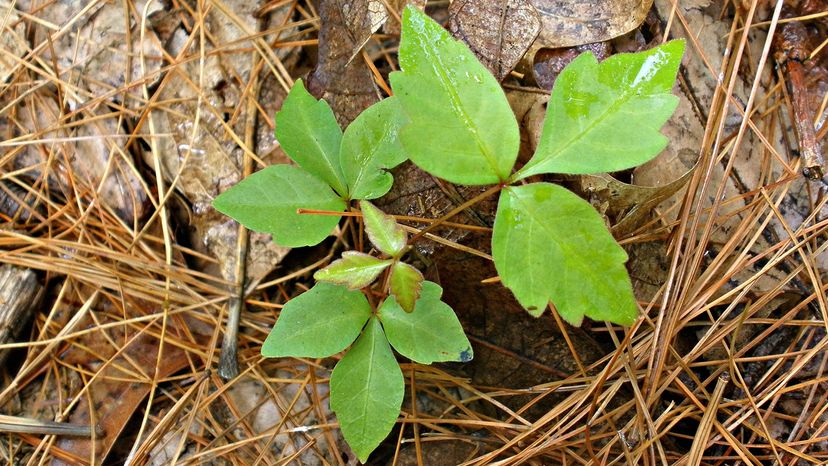 Ridding your yard of poison ivy is tough, and is best to do when it's still small and in the seedling stage. Ansel Oommen, Used Under Creative Commons (CC BY-NC 3.0 US)

Poison ivy is often difficult to avoid. Even if you don't directly brush up against the plant, you can get poison ivy from touching a garden tool, ball or even a dog or cat (animals don't have the same sensitivity) that has urushiol on it. Some creams containing the ingredient bentoquatum can block urushiol and offer some protection before poison ivy exposure. Still, your best defense is to stay away from poison ivy and to get rid of it in your yard.

But the plant is not an easy foe to clear. If you spray it with a weed killer, you may destroy the poison ivy, but you must be careful not to harm other plants around it that you want to keep. Your other option is to remove the poison ivy by hand; pull the plants out from the roots, because any trace of a plant you leave behind can regrow. The key also is to wear a long-sleeved shirt, long pants, gloves and boots to avoid any contact with your skin. Immediately remove your clothes after you finish and wash them with soap and water. And take a shower for good measure.

Never burn poison ivy plants; the urushiol vaporizes when heated and when it gets into the smoke, it can severely irritate the lungs when breathed in.

Fiction: Poison ivy is contagious. Fact: You can't spread poison ivy by coming into contact with a person who has it, unless that person or animal still has urushiol on their skin. Fiction: If I eat poison ivy, I'll become immune to rashes in the future. Fact: Eating poison ivy can cause a potentially fatal allergic reaction and won't make you immune to rashes. Fiction: Some people are so sensitive to poison ivy that they can get a rash by just being near the plant. Fact: You have to touch the plant to get a rash; just being close to it won't cause an outbreak. Fiction: You can't get poison ivy from a dead plant. Fact: Urushiol can linger on surfaces — including a dead plant — for several years.