The predator waits patiently while its prey wanders about, unaware that danger lurks just inches away. Settling down to taste some sweet-smelling sap, the unsuspecting prey has made a fatal mistake. Swinging swiftly shut, the jaws of the predator close around its body. The struggle is brief, and soon the plant settles down to digest its tasty meal.

Plants that eat other creatures? It sounds like a genetic experiment gone awry. But there's actually nothing unnatural about it; carnivorous plants have existed on this planet for thousands of years. There are more than 500 different kinds of these plants, with appetites ranging from insects and spiders to small, one- or two-cell aquatic organisms. To be considered carnivorous, a plant must attract, capture, kill and digest insects or other animal life.

One carnivorous plant in particular has captured the public's imagination: The Venus Flytrap (Dionaea muscipula). Many people first see this amazing plant in action during their elementary school years, and are fascinated by its strange dietary habits and unique appearance

Have you ever wondered what would happen if you stuck your finger in the open leaves of a Venus Flytrap, or how the plant got such an odd name? In this article, we'll answer these questions, plus a bunch more.

Although the Venus Flytrap has captivated people across the world, the plants actually grow in an incredibly small geographic area. In the wild, they are found in a 700-mile region along the coast of North and South Carolina. Within this area, the plants are further limited to living in humid, wet and sunny bogs and wetland areas. Because Venus Flytraps are so scarce, some early botanists doubted their existence, despite all the stories spread about a flesh-eating plant.

So, how did the plant end up with the intriguing name of Venus Flytrap? It's not too hard to imagine how 'Flytrap' might relate to its insect-catching abilities, but 'Venus' is less clear-cut. According to the International Carnivorous Plant Society, the origin of the name is quite lurid. The Venus Flytrap was first studied in the 17th and 18th centuries, when societal mores were a bit more puritanical than they are today, and were somewhat obsessed by human urges and sins. Women in particular were often portrayed as temptresses, greedy for power. The botanists of this time apparently found a parallel between the trap of the plant -- capturing and digesting insects -- and certain aspects of female anatomy and behavior. Thus, the story goes that they named the plant after Venus, the pagan goddess of love and money.

If you've seen the musical/movie "Little Shop of Horrors," you might have been left with a bad impression of what really is a neat plant. While Audrey, the mutant Flytrap in the movie, developed a taste for humans, the real plant prefers insects and arachnids like:

If other plants can thrive on gases in the air plus water from the soil, why do Venus Flytraps eat insects? Flytraps actually get a good deal of their sustenance like other plants do, through the process of photosynthesis. During photosynthesis, plants use the energy of the sun to drive a reaction that converts carbon dioxide and water to sugar and oxygen. The sugar produced is then converted to energy in the form of ATP, through the same processes used by our bodies to process carbohydrates.

However, in addition to synthesizing glucose, plants also need to make amino acids, vitamins and other cellular components to survive. To accomplish this, plants needs additional nutrients like:

In the bogs favored by Venus Flytraps, the soil is acidic, and minerals and other nutrients are scarce. Most plants can't survive in this environment because they cannot make enough of the building blocks necessary for growth. The Venus Flytrap has evolved the ability to thrive in this unique ecological niche by finding an alternate means of getting key nutrients like nitrogen. Living creatures like insects provide a good source of the nutrients missing from the soil, and they also contain additional energy-laden carbohydrates.

While our imaginations dream up huge killer plants, we are the real threat to the continued existence of Dionaea muscipula and other carnivorous plants. The flytrap has been endangered in the wild due to:

Inside the Venus Flytrap 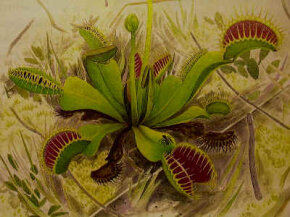 Carnivorous plants have to be able to:

All of these steps are accomplished through simple mechanical and chemical processes. Unlike us, plants don't have a brain or nervous system to coordinate their physiological functions and tell them that they are hungry so they should go buy a burger from the nearest fast food place. Plants also don't have complex muscles and tendons to grab food, chew it, swallow it and process it. The Venus Flytrap completes the entire process by way of a specialized set of leaves that is both mouth and stomach in one.

Most plants have some mechanism to attract animals and insects, regardless of whether or not they plan to feast on their guests. For example, non-carnivorous plants have evolved intense smells or syrupy saps to attract bees, butterflies and other insects; these bugs are then used by the plants to ferry the pollen needed to fertilize neighboring plants of the same species. In the case of the Venus Flytrap, the leaves forming the trap secrete a sweet nectar that draws in insects searching for food.

When an insect lands or crawls on the trap, it is likely to run into one of six, short, stiff hairs on the trap's surface. These are called trigger hairs, and they serve as a primitive motion detector for the plant. If two of these hairs are brushed in close succession, or one hair is touched twice, the leaves close down upon the offending insect within half a second.

What causes the leaves to squeeze shut? Nobody knows exactly how the sequential, mechanical stimulation of the trigger hairs translates into closing the trap. The prevailing hypothesis of the day is that:

Even without a brain to analyze what it's eating, the Venus Flytrap still manages to differentiate between insects and non-edible debris that might fall into its trap. This step is also mediated by the six sensitive trigger hairs. An insect caught inside the partially closed trap will continue to thrash about in an attempt to escape. It's guaranteed that at least one (if not all) of the trigger hairs will be tweaked by the insect's movement. This serves as the signal to close the trap entirely.

Inanimate objects like stones, twigs and leaves that fall into the trap, or objects that are placed there (what child can resist sticking the tip of their pencil into the trap to watch it close?), will not move around and fire the trigger hairs. If there is no further stimulation of the hair, the trap stays in its partially shut state until tension can be re-established in the leaves of the trap. This process takes about 12 hours, at which point the leaves spread apart again. The unwanted object either falls out as the leaves re-open or is blown out by the wind.

The selection process obviously isn't perfect; while the trap is out of commission, real food in the form of flies and spiders may be crawling all around the plant. Imagine if you had to sit with a chicken bone or peach pit in your mouth for 12 hours while the rest of your dinner sat on the table in front of you! The difference is that you are conscious of what you're eating, while the Venus Flytrap is a passive participant in choosing what it's going to eat for dinner. The process is actually a nifty way for the Venus Flytrap to get around two problems:

In the next section, we'll talk about the final characteristic of the carnivorous plant: digesting prey. Let's see what happens when the trap shuts on something edible.

Once the trap fully closes, the leaves form an airtight seal so that:

To make sure that the insects are contained within the trap, the edges of the leaves have finger-like cilia that lace together when the leaves press shut. These long, hair-like projections make the plant look like it has spiny teeth; but the cilia are really only used to latch the trap shut.

There is an upper limit to the size of insect that the trap can accommodate. At most, traps are about 1 inch long, and an insect ideally should be about one-third of this size. If an insect is too large, the trap will not be able to form a seal tight enough to keep bacteria and molds out. Once bacteria and mold have a way in, they can proliferate as they feast on the decomposing insect, and the leaves of the trap will succumb to the assault as well. The trap will turn black as the leaves rot, and the whole thing will eventually just drop off the plant.

Venus Flytraps can tolerate losing a trap here and there, because the plant can eventually sprout new ones. Like a household product manufacturer, nature has engineered the traps with planned obsolescence. After about 10 to 12 closures (partial or complete), the traps lose the ability to capture anything. The leaves remain spread wide open, and instead of going through the ritual of attracting insects and eating them, the former trap devotes its energy to the process of photosynthesis for the remainder of its life span, usually around 2 to 3 months. This way, if a trap is repeatedly stimulated by non-edible objects, the plant can recoup some of the energy and ATP lost to opening and closing the trap during this time spent focusing solely on photosynthesis.

But back to dinner -- once the insect is firmly ensconced in the trap, the process of digestion can begin. The trap now serves as a miniature stomach. Just like our stomachs, the trap secretes acidic digestive juices that:

These digestive juices are secreted from glands on the inside surface of the trap, right onto the trapped prey. The insect is bathed in these juices over a period of five to 12 days, during which the insect is digested and nutrients are extracted. The time it takes depends on:

The process continues until all that's left of the insect is its hard exoskeleton. (Unlike humans and other vertebrates, who have an internal rigid skeleton made out of calcified bone tissue, insects and arachnids use a more flexible, external exoskeleton to both protect and form the framework for their bodies.) Once the nutrients are depleted from the acidic bath, the plant reabsorbs the digestive fluid. This serves as a signal to reopen the trap, and the remains of the insect are usually either washed away in the rain or blown away by the wind.

Unless you live where Venus Flytraps grow naturally, you probably won't be able to just plop one into the dirt in your garden and watch it grow. However, if you are willing to invest a little time and effort, you can certainly grow Venus Flytraps at home.

The basic rule for growing Venus Flytraps is to mimic the conditions in which they normally prosper. This means that they must be in an environment that is:

For more information on Venus Flytraps and related topics, check out the links on the next page.