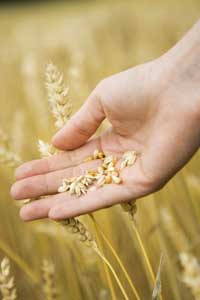 When wheat flowers fertilize, they produce grains, the edible portion of the plant. Here, we see the grains surrounded by bits of chaff in a person's palm.
Riitta Supperi/Gorilla Creative Images/Getty Images

If you've ever flown on a commercial airliner and grabbed a window seat, there's a good chance you've witnessed the sheer magnitude of our dependence on wheat. Fields of the crop stretch for miles, dividing the landscape into a patchwork of green and gold farmland. It's easy to get lost in the big picture when gazing at such sights, but at the heart of it all, wheat is just a durable grass, and each plant produces a handful of nutritious grains.­

Wheat grows in a variety of climates and soils, but thrives best in temperate zones. It's an annual grass, which means it produces a harvest once a year. The tall plant typically boasts hollow stems, long leaves and heads of compacted flowers. Sometimes there are as few as 20 flowers, but some species sprout up to 100.

Believe it or not, the wheat plant's mission in life has nothing to do with Big Mac buns and Twinkies. The plant needs to grow to its full height and develop flowers, where reproduction will take place to ensure the plant's genetic future in the form of seeds. This yearlong lifecycle takes place in four stages. First, the plant goes through tillering, in which the subsurface crown produces leafs and lateral branches called tillers. Then, during the stem extension stage, the plant shoots up to its full height through a series of stem segments, joined to each other by nodes. Then, at the top, the stem terminates in a head or spike during the heading stage.

At this point, each head fertilizes its own flowers due to the movement of pollen from the male stamen to the female stigma. Once this happens, grain develops in the ripening stage, and the plant begins to wither and die. Each grain or kernel of wheat consists of a wheat plant embryo called a germ (as in germinate), protected by a thick outer coating called the bran and fueled by the protein-rich endosperm. These resources protect and nurture the wheat germ, allowing it to grow out of the soil into a new wheat plant.­

­The Earth is home to thousands of different wheat grasses, all categorized under genus Triticum in the Gramineae grass family. Given its importance as a global food crop, this kind of variety is really good news. Should a new plant disease wipe out one of these forms of wheat, there are still others that might be resistant. Scientists recognize the value of this biological diversity and have taken measures to store the world's wheat away in seed banks. Still, despite the threat organisms such as the black stem rust fungus pose, wheat growers concentrate most of their efforts on three key varieties of wheat.

But how do we harvest the wheat grains and turn them into delicious foods? Skip to the next page to find out.

You might have heard about people going on gluten-free diets or being allergic to gluten, thanks to celiac disease. The substance is a mixture of the two proteins gliadian and glutenin, and it's found in a lot (but not all) bread products. It gives bread an elastic, chewy quality.