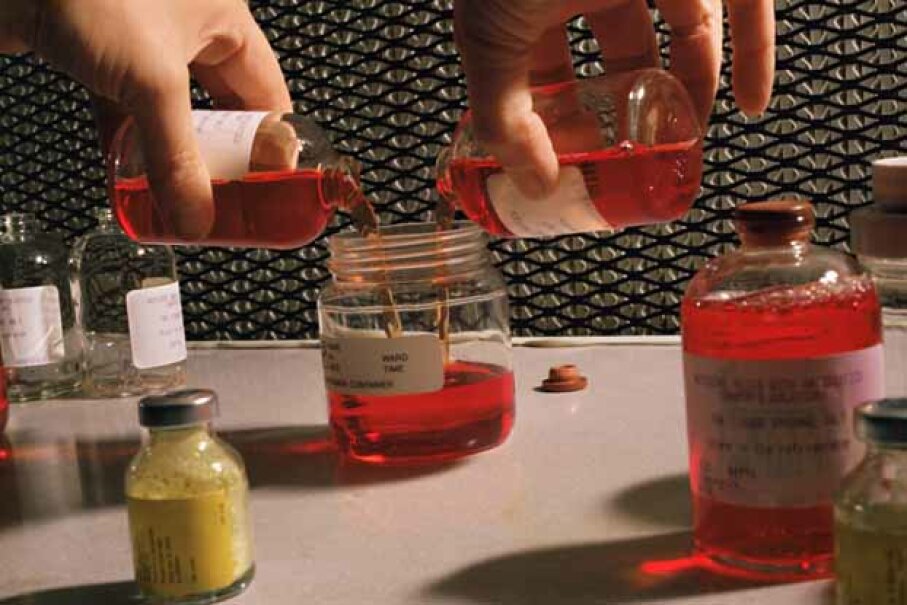 Sources for antibiotics can be found in some very strange places. Image Source/Photodisc/Getty Images

A lot of the medications that we depend upon today were discovered in some distinctly yucky places. That tradition goes back to 1928, when Alexander Fleming discovered the very first antibiotic, penicillin; bacteria-killing mold was growing in an open petri dish that had been accidentally exposed to the air.

Another now-important antibiotic, vancomycin, was first discovered in 1952 when an missionary in Borneo sent a sample of dirt from the jungle to a friend, who happened to be an organic chemist at pharmaceutical giant Eli Lilly [source: Levine]. Cephalosporins, another important class of antibacterial drugs, were first found in 1948 in a Sardinian sewer [source: Tirrell].

And you were picturing scientists in white coats surrounded by gleaming equipment, right?

The search for new antibiotics has taken upon additional urgency, because of health experts' warnings that new strains of bacteria increasingly are resistant to our tried-and-true drugs. According to the Centers for Disease Control and Prevention, at least 2 million people in the U.S. become infected with drug-resistant bugs each year, and at least 23,000 of them die as a result.

That's why scientists, in their exhaustive effort to find replacements drugs, are looking in places that you wouldn't suspect — from seafloor muck to insect brains. Here's a look at 10 of the weirdest sources for antibiotics that researchers have discovered in recent years. 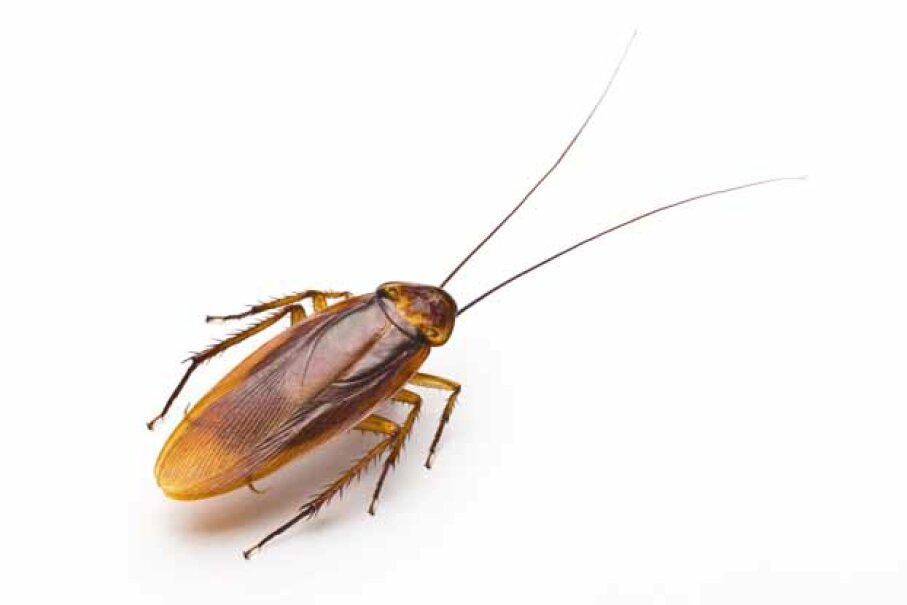 Imagine, crushed brains from these disgusting creatures can be used for antibiotics. iStock/Thinkstock

You might think that cockroaches are nasty little creatures, but eventually they may help to protect you against some even nastier illnesses. In a study released in 2010, researchers from Great Britain's University of Nottingham reported that they had used an extract of crushed cockroach and locust brains to kill several different microbes, including a strain of Escherichia coli (E. coli) known for causing bacterial meningitis, a potentially lethal brain infection, and methicillin-resistant Staphylococcus aureus (MRSA) [source: Svalavitz].

The extract's effectiveness against MRSA was particularly good news, because the so-called "superbug" is resistant to most existing antibiotics. According to the study's co-author, Naveed Khan, he and his colleagues got the idea to study the insects because they wondered how they coped with all the bacteria and parasites found in their usual habitat of sewage-filled drains [source: Svalavitz]. 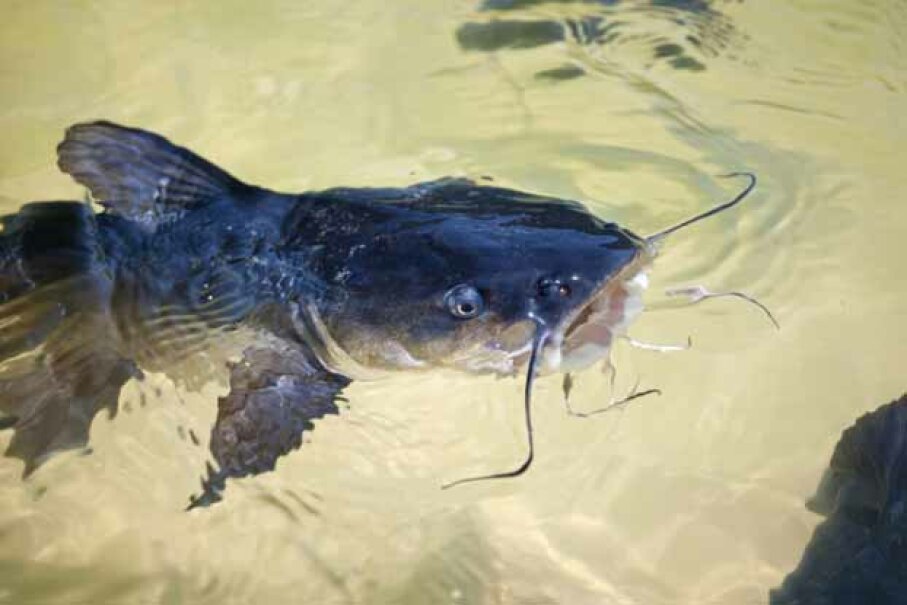 As bottom feeders that root around in the muck for smaller creatures to eat, catfish continually are exposed to all sorts of disease-causing microorganisms. But that doesn't seem to hurt them much, which aroused scientists' curiosity. Eventually, they discovered that the slimy mucus catfish secrete onto their skin protects them against the bugs that they encounter in their environment.

In a study published in World Applied Sciences Journal in 2011, Indian researchers collected epidermal mucus from catfish caught in that country's Parangipettai coastal region, and tested it against 10 different types of disease-causing bacteria and 10 different fungi. The researchers found that the mucus was very effective in inhibiting the growth of various microbes dangerous to humans, including E. coli and Klebsiella pneumoniae, which attacks the lungs [source: Anbuchezhian, et al.]. 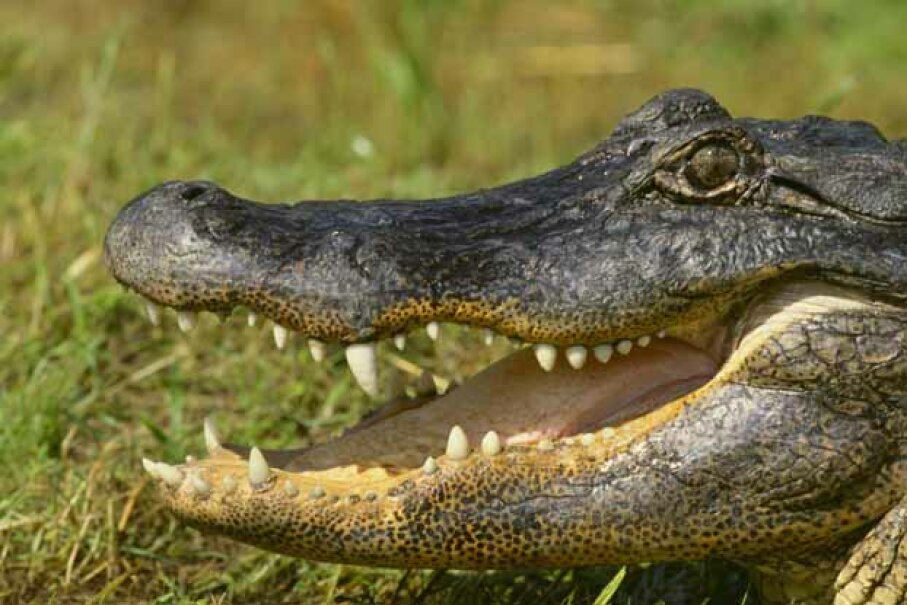 Scientists wondered how gators recovered so quickly from bites during attacks. Turns out they have powerful immune systems. Fuse/Thinkstock

A lot of people are scared of alligators and with good reason – their teeth are sharp! Scientists, though, are interested in the creatures' powerful immune systems, which help them to recover from injuries sustained in territorial combat with other gators. They see gators as a potentially valuable source of powerful new antibiotics that could be used to fight infections associated with diabetic ulcers and severe burns, as well as superbugs.

In 2008, a study by researchers from McNeese State University and Louisiana State University found that proteins extracted from gators' white blood cells were capable of killing a wide range of bacteria that threaten humans, including the notoriously drug-resistant MRSA [source: Marsh and Bernstein]. McNeese researchers now are trying to replicate one particular alligator blood protein that reportedly attaches, Velcro-like, to the surface of a microbe and then tears a hole in its outer wall to kill it [source: Giovinco]. 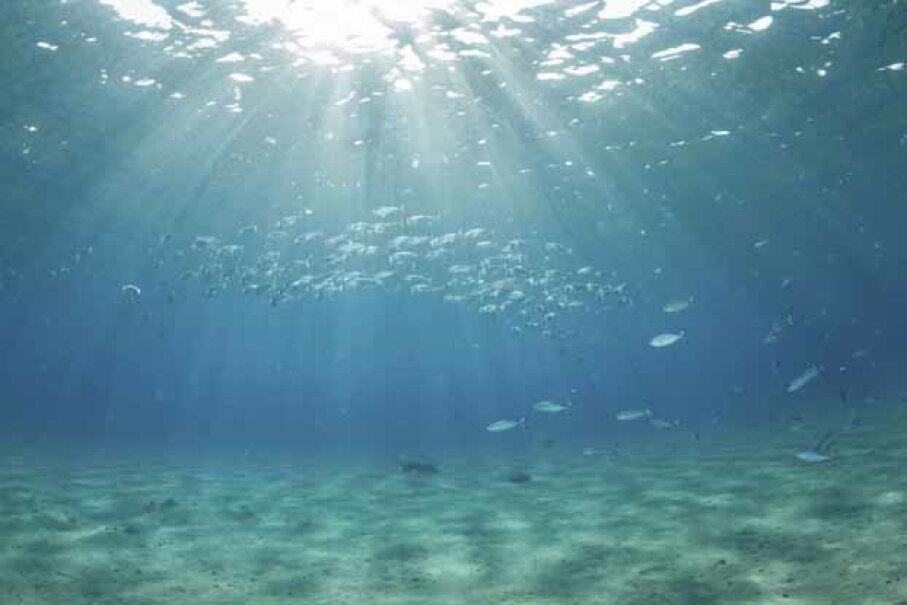 Ocean sediment yields a microorganism that can be used to create a drug to fight anthrax. iStock/Thinkstock

Anthrax, a microbe that can cause a victim to develop a fatal buildup of fluid in the lungs, is something that we're all afraid of, and for good reason. When some malicious person sent a bunch of letters tainted with anthrax through the mail in 2001, 11 people were hospitalized, and five of them ended up dying [source: NIH].

And although anthrax infections can be treated with existing antibiotics such as ciprofloxacin, there's always the possibility that terrorists might create a strain resistant to those drugs. That's one reason why researchers at the Scripps Center for Marine Biotechnology and Biomedicine, working in conjunction with San Diego-based Trius Therapeutics, were excited about the discovery of a new compound, anthracimycin, that initial testing showed to be a potent killer of both anthrax and MRSA. Anthracimycin, oddly enough, is produced by a microorganism that the researchers discovered lurking in ocean sediments, just off the shores of Santa Barbara, Calif. [source: Aguilera].

Possibly because it comes from such an unlikely place, anthracimycin's chemical structure is very different from existing antibiotics [source: Redfern]. That might make it a lot tougher for microbes to become resistant to it. 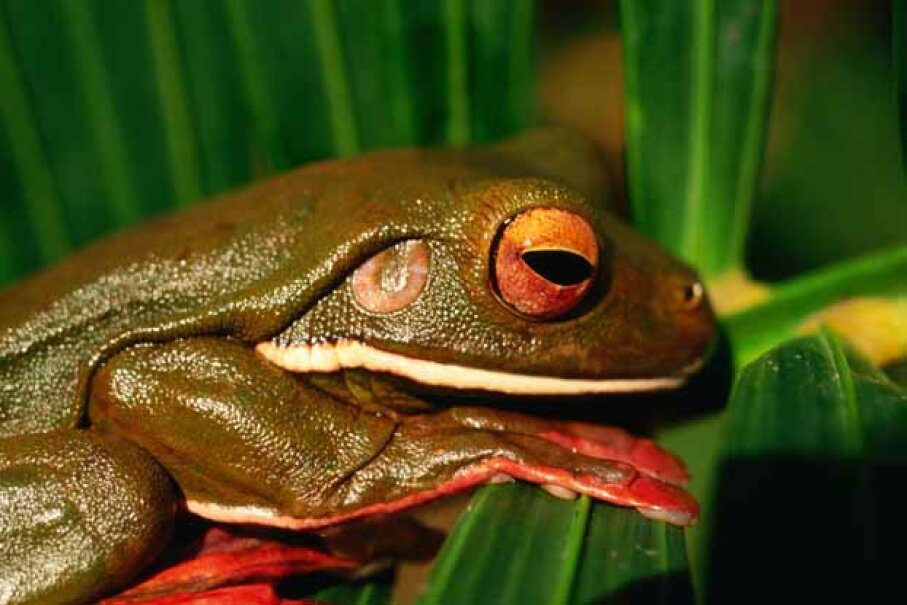 They may look kind of comical with those big bulging eyes and long tongues, but don't let their looks deceive you. Frogs, who've been around for 300 million years and seem to thrive even in polluted waterways, are amazingly tough, resilient animals. (Although there has been an epidemic of deaths from fungus.) That's why researchers have started looking to frog skin—or rather, the chemicals found on it—as a potential source of new antibiotics to protect humans against disease.

In 2010, researchers at United Arab Emirates University reported at a meeting of the American Chemical Society that after studying 6,000 different frog species, they had identified more than 100 potentially bacteria-killing substances that eventually might be developed as drugs. Developing antibiotics from chemicals on frog skin is a tricky feat, because some of the chemicals can be toxic to human cells as well as bacteria. The researchers are trying to get around that problem by subtly altering the chemicals' molecular structure to make them less dangerous for people, while still retaining their bacteria-killing properties [source: BBC News]. 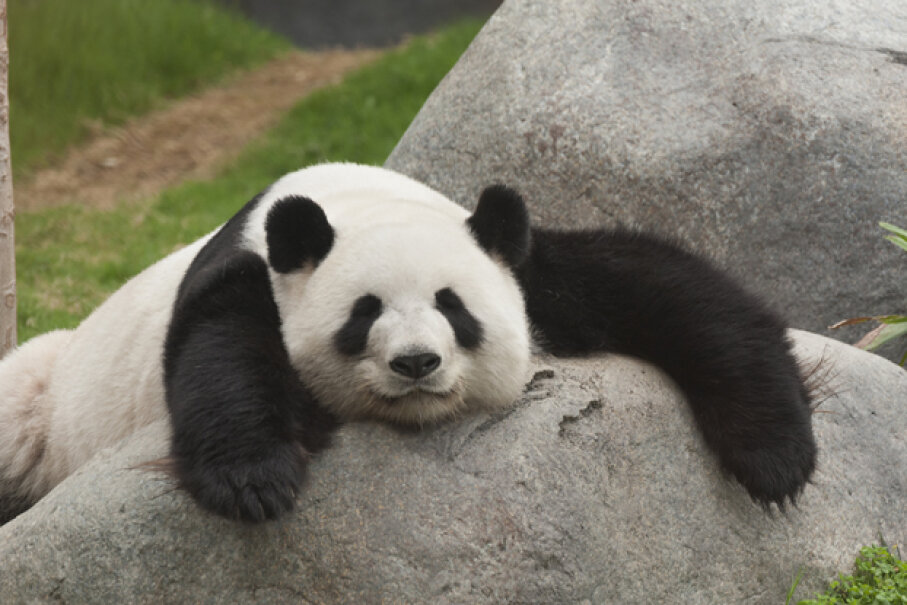 These cute pandas have a powerful antibiotic compound in their blood. Fortunately it can be reproduced synthetically. iStock/Thinkstock

With those large, chubby bodies and black-and-white faces that appear to have a big smile etched into them, pandas seem like the epitome of cute and cuddly. But researchers at China's Nanjing Agricultural University, who studied the endangered animals' DNA, found that their blood contains a powerful antibiotic compound called cathelicidin-AM, which helps to protect them against bacteria and fungi.

The chemical is so potent that it can kill bacteria in less than an hour, about a sixth of a time that it takes most familiar antibiotic drugs to do the job. Researchers are now trying to figure out how to turn the chemical into a drug that would work in humans. Fortunately for pandas, whose numbers in the wild are down to an estimated 1,600, scientists don't actually need to extract the substance from actual panda blood. They can make a synthetic version in the lab [source: Roberts]. 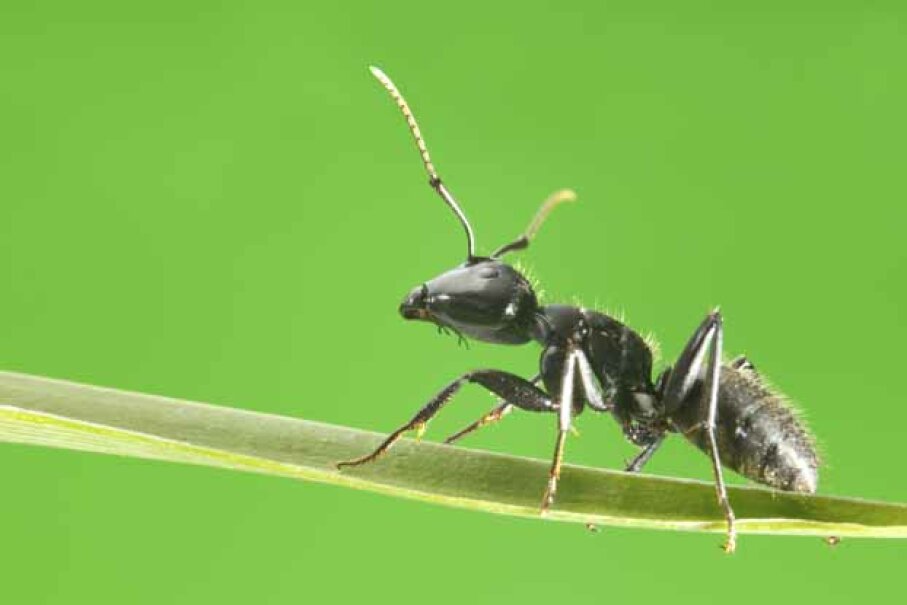 British researchers have discovered that ants produce and use multiple antibiotics in a way similar to doctors using multidrug therapy to treat humans. iStock/Thinkstock

South American leafcutter ants are known mostly for their mind-boggling strength, as evidenced by their ability to march through the rainforest while carrying leaf sections twice their size. But it's the tiny creatures' power to thwart microbes that interests drug researchers even more. It all has to do with how the ants prepare their food by transporting the leaves underground, where they decay and form a garden of fungus that supplies nutrients to their larvae and queen.

To protect their repast from unwanted microbes and parasites, the ants have developed an antibiotic-producing bacteria on their bodies. British researchers have discovered that the ants actually produce and use multiple antibiotics, in a way similar to doctors using multidrug therapy to treat infections in humans.

One of the chemicals produced by the ants is similar to an antifungal drug already used in modern medicine. But researchers also have hopes of discovering completely new substances that could be useful in fighting human disease [sources: JIC, Science Daily]. 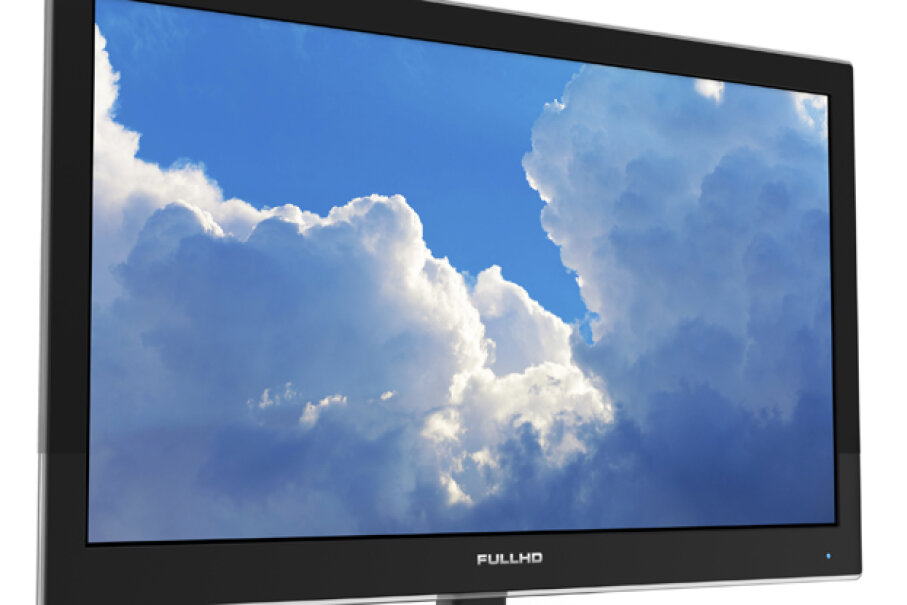 The chemical waste inside LCD sets can be transformed into antimicrobial cleaning products. iStock/Thinkstock

Some people think that too much television rots your brain, but there may be an upside to the much-maligned medium. Old TV sets could eventually play a role in protecting you from dangerous infections.

Researchers at the University of York in England reported in 2010 that they had discovered a way of transforming a chemical compound used in making liquid crystal display (LCD) sets into an antibacterial substance. The chemical from the sets, polyvinyl-alcohol or PVA, was found to destroy microbes such as E. coli and some strains of Staphylococcus aureus.

In order to convert the chemical waste into an antibiotic, researchers heated and cooled the PVA, then dehydrated it with ethanol. Next, they added silver nanoparticles to enhance its antimicrobial properties. Researchers may use the chemical to develop antimicrobial cleaning products that could reduce hospital patients' risk of infection [source: Science Daily]. 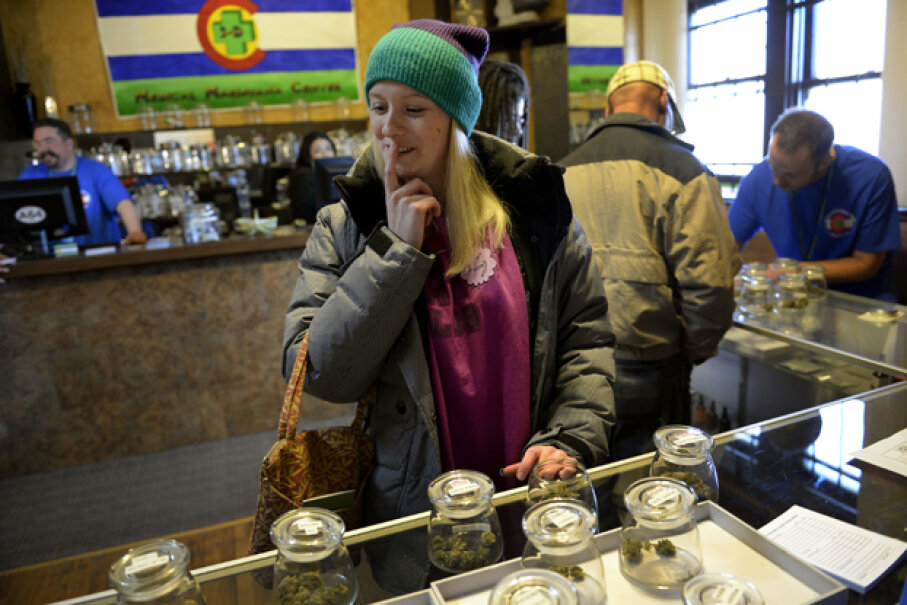 Marijuana has been legalized in many U.S. states for medical purposes, such as nausea relief and as a treatment for anxiety. But there's also a possibility that Cannabis sativa, the plant from which marijuana is produced, may also have antibacterial properties.

In 2008, researchers in Italy and Great Britain reported that five different chemicals extracted from marijuana were effective in killing MRSA. The cannabinoids, as the chemicals are called, attacked the microbes in a manner that was different from conventional antibiotics, which suggests that they might work on other germs that have developed drug resistance as well.

At least two of the cannabinoids don't have mood-altering effects, so there may be a way to use them without getting patients stoned in the process [sources: Schultz, Wilbert]. 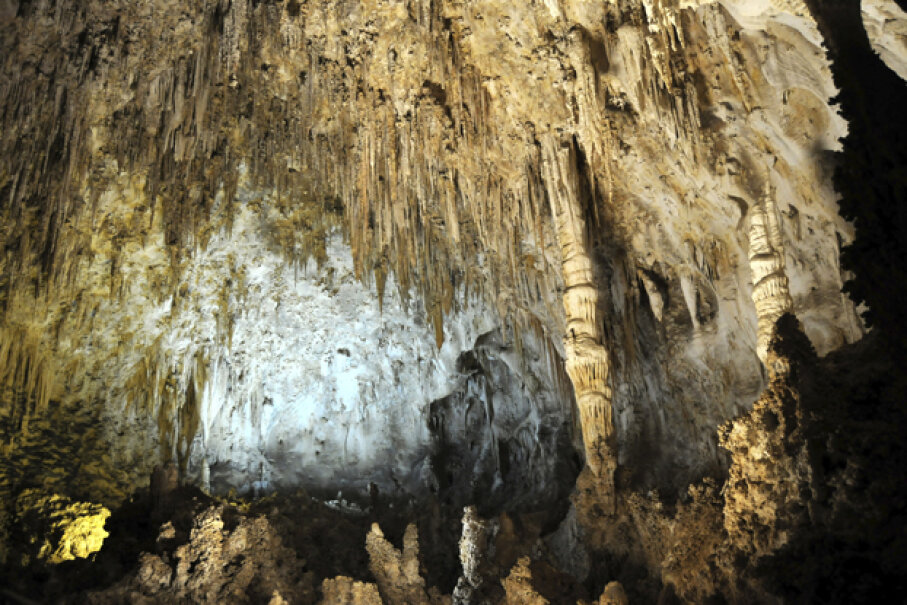 Caves like this one beneath the Carlsbad Caverns harbor rock-eating bacteria that are potential antibiotics. iStock/Thinkstock

Remote Lechuguilla Cave, which lies 1,600 feet (488 meters) below New Mexico's Carlsbad Caverns, is the deepest limestone cave in the U.S. The cave's more than 136 miles (220 kilometers) of underground passages form one of the planet's most sprawling subterranean networks.

But it's not just the cave's size or its breathtaking 20-foot (6-meter)- tall gypsum chandeliers and other exotic rock formations that fascinate scientific researchers. The cave is also home to an assortment of rock-eating bacteria that feed on the sulfur, iron and manganese deposits found inside [source: National Parks Service]. 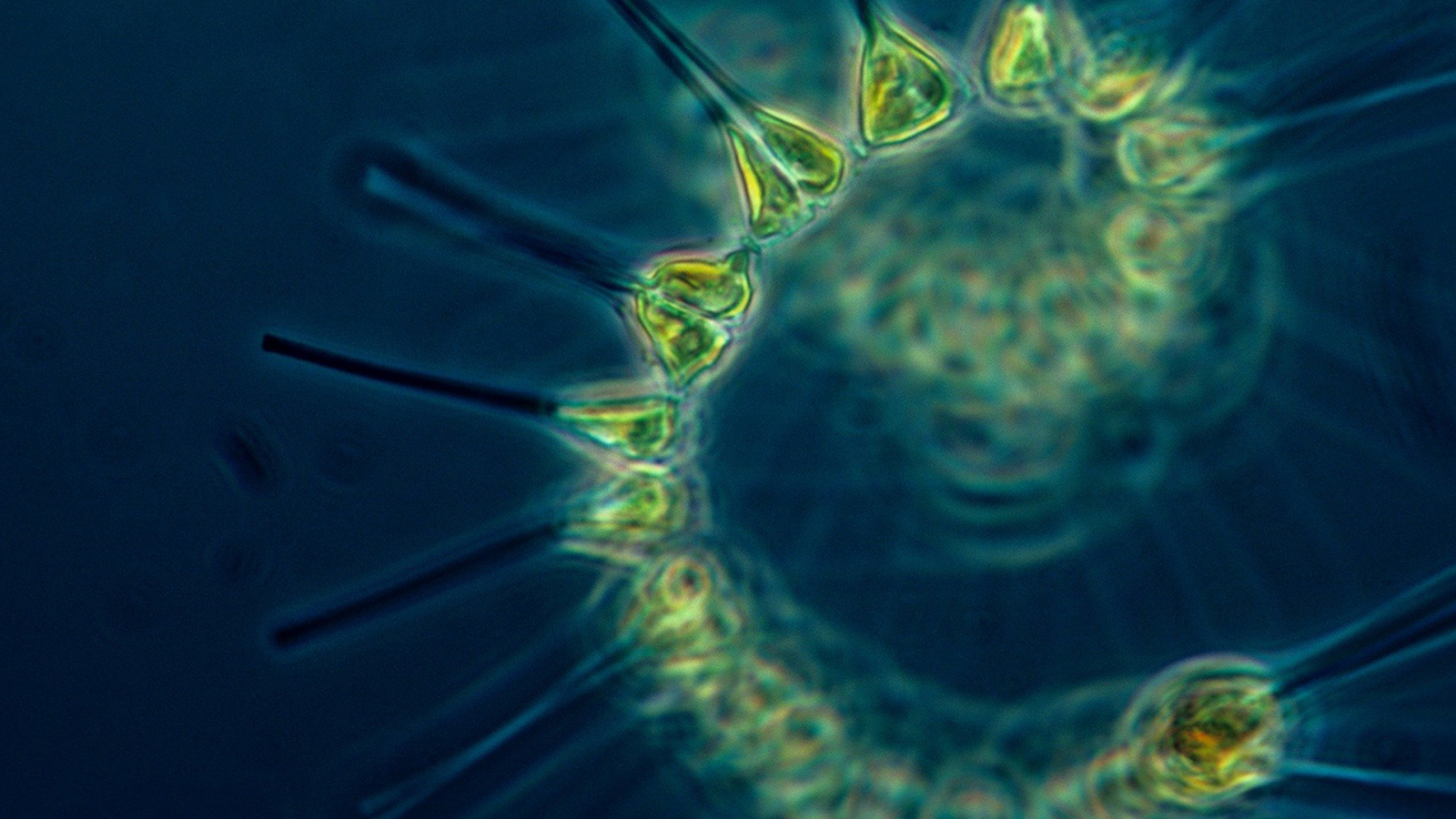 A single-celled algae, barely visible to the eye, plankton contributes to the world's most important resources, and is essential to all life.

It's been scary to watch as diseases that we thought had been conquered by antibiotics suddenly come roaring back with new, drug-resistant vigor. I read recently, for example, that the sexually-transmitted disease gonorrhea has grown resistant to nearly every antibiotic that's been used against it, so that the last remaining line of defense is ceftriaxone, followed with an oral dose of either zithromycin or doxycycline. If that treatment stops working, we're in big trouble. That's why, in my view, we have to resist the urge to trim government funding for medical research, in the interests of reducing government red ink. Instead, we should be providing stronger backing to researchers who are trying to find new antibiotics, which is a difficult and time-consuming process.