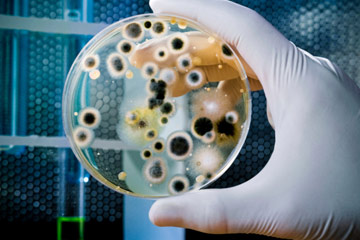 Bacteria can be real chatterboxes.
©iStockphoto.com/Thinkstock

Let's say you're coming home after a long day of work. The house is quiet, but the lights are on, so you call out, "Anybody home?" Your kids respond with joyous shouts, and your spouse greets you from the kitchen. In this way, you have accounted for your family members. You've also gotten a sense of their needs -- if your spouse had been trapped beneath fallen furniture, he or she would have cried out for help. And if your kids had observed your arrival by asking if you'd brought home pizza, then you would know they were hungry.

You've probably heard animal noises that indicated some form of communication, but it wasn't until fairly recently that we learned that even some of the smallest organisms on Earth, bacteria, can communicate with each other. In the 1960s, researchers observed that bacteria known as Vibrio fischeri exhibited greater amounts of luminescence as the bacterial population grew. Emanating a glow takes a lot of metabolism, and the scientists determined that the bacteria were able to preserve their energy until they realized that there were enough of them to make a really good glow. Researchers called this phenomenon quorum-sensing -- the bacteria communicate to determine the size of their community.

But how? It turns out that the bacteria emit autoinducers, or signaling molecules similar to pheromones. The concentration of autoinducers in any given area indicates the size of the population. But bacteria don't just communicate with their own kind -- in recent years, scientists have determined that bacteria have a receptor for species-specific autoinducers, as well as a receptor for the signals sent out by all other kinds of bacteria. Not only does this indicate that many species of bacteria beyond the bioluminescent ones have the capability to communicate, it means that all bacteria in close proximity are probably chatting it up. Much like we account for our loved ones at the end of the day, the bacteria are taking roll as well.

Why does this matter? Knowing how bacteria communicate could impact how we fight disease. Many bacteria begin to wreak havoc on the human body only once there are enough to overwhelm the immune system. Instead of waiting for bacteria to attack us, drug manufacturers are interested in developing a way to scramble the wires of bacterial communication before it starts. That way, bacteria will never know that they've achieved the kind of threshold necessary to establish an infection in the body.