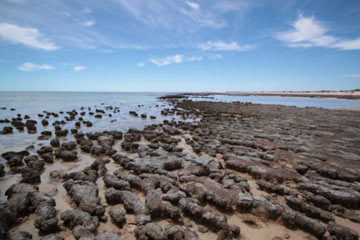 When microbial biofilms bind together sedimentary grains, they can form stromatolites such as these on the coast of Australia.
iStockphoto/Thinkstock

At first glance, it's not clear what dental plaque, the persistent slime in your shower drain and a slippery submerged rock have in common besides the fact that they can be a headache -- or in some cases a toothache -- to remove. To the naked eye, it's nearly impossible to see what's responsible for these lined surfaces.

If you look closer, with the help of a microscope, you'll realize these slimy aggregations are anything but dull. Instead, they're often diverse, tiny communities of living microorganisms bound in a matrix, or a thick, adhesive substance. Who would've guessed the grimy buildup in your toilet bowl is a complex clump of living, communicating cells?

Though Antoni van Leeuwenhoek, the discoverer of bacteria, described similar formations when he studied his own dental plaque in the 17th century, it wasn't until the 20th century that scientists had the tools they needed to take a closer look at how the structures develop [sources: Montana State University CBE, Costerton and Wilson].

These colonies, also called biofilms, form when single microorganisms attach to a hydrated surface and undergo a "lifestyle switch," giving up life as a single cell to live on a surface in an adhesive cell matrix with other microorganisms [source: Lemon et al.]. Some definitions state that biofilm cells "irreversibly attach" to a surface, which means they can't be removed by gentle rinsing [source: Donlan].

But why should we care about biofilms?

For starters, they can attach to both living and nonliving surfaces (including humans), create problems in the medical field, alter industrial production practices and even contribute to environmental cleanup. In addition, some researchers estimate that biofilms constitute more than half of the world's biomass [sources: Montana State University CBE; Sturman]. Biofilms are so abundant it's surprising that we don't notice them more.

In this article, we'll learn about how biofilms work, how they're both problematic and beneficial, and what researchers are doing to control them. To begin, let's look at the life cycle of a biofilm.

What exactly makes a cell give up flying solo in the first place? We'll find out on the next page.