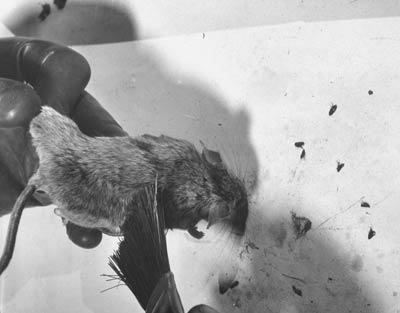 A researcher brushes fleas off of a rat in a U.S. public health bubonic plague unit in the 1950s.
Joseph Scherschel/Getty Images

Long before the development of microscopes and antibiotics, many cultures associated outbreaks of plague with rats -- specifically, dead rats. This is because plague is an enzootic disease, or a disease that lives primarily in nonhuman animals. The animals that typically carry plague include prairie dogs, voles, wild gerbils and other rodents. Rats, however, are the most common.

When plague-infected rats die, their fleas look for new hosts. Fleas generally prefer to feed off of specific animals, but they will turn to other food sources when necessary. So when an outbreak of plague kills lots of rats, their fleas jump to the nearest source of blood. When people are that source, plague becomes an epizootic disease, or a disease that jumps from animals to humans. Many epizootic diseases, including avian flu, are particularly lethal to humans, who have no natural resistance.

The concept of natural resistance may be behind sudden plague outbreaks as well. When most of the rats in a particular area die of plague, the ones that survive have natural immunity. They pass this immunity to their offspring, but it becomes diluted over several generations. The rats lacking immunity then die of plague, which is usually present in the rodent population. A few rats survive, and the cycle begins again.

The fact that rats are a natural reservoir of plague is one of the reasons why the disease is less common today. In many industrialized nations, particularly in affluent areas, rats are not as common as they were before and during the Middle Ages. Better standards of living and better hygiene practices have cut down on the rat population, and with fewer rats come a smaller disease reservoir.

But the natural rat reservoir is also why plague still exists. In impoverished areas and developing nations, rats can still be prevalent. Exterminating the entire species would be almost impossible and would also affect the rest of the ecosystem.

In agricultural societies, people tend to live and work near fields and storage buildings where rats live. In addition, a mild climate and lots of sandy soil are ideal for the development of the rats' fleas. Places with both of these qualities tend to be prone to plague. Examples of such locations are the American southwest, as well as parts of South America, Africa and Asia. In Africa, most plague cases occur in Madagascar and Tanzania. Most cases in the Americas occur in Brazil, and more than 75 percent of Asian cases occur in Vietnam [source: WHO]. Although the Black Death and other epidemics had an enormous impact on Europe, plague is not common there today, and it doesn't exist in Australia or Antarctica.

Human behavior can also affect plague outbreaks. For example, in 1989, stored food from an unusually large harvest in Botswana led to a higher-than-normal rat population. Fleas from these rats made their way to people, and plague began to spread. In Mozambique, the practice of catching and skinning rats leads to plague infections in women and children [source: WHO]. Defoliation during the Vietnam War probably contributed to an epidemic after the war ended. Some experts also believe that new suburbs in the American southwest may lead to more plague cases as people move to areas naturally inhabited by rats.

For all of these reasons, public health officials still have to focus on preventing plague and on improved tests and treatments. We'll examine some of them next.