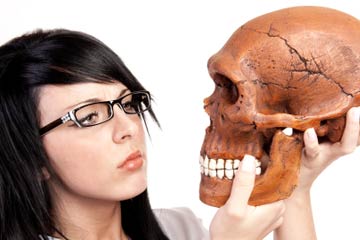 What answers can we find in a skull?
iStockphoto.com/Crazytang

Despite the long lines outside of technology stores anytime a new gadget is released, there was a time not so long ago when people in the United States actually went about their days minus cell phones, personal computers, electronic readers and televisions. Glance back even further in our history, and you'll see yourself in a horse-drawn buggy instead of an automobile. These are just examples of recent human advances;we've been evolving for millions of years. First, our early ancestors led the way in human evolution. Then, a couple hundred thousand years ago, the first true "us," also known as Homo sapiens, took over the reins.

Take a minute to think about all we've gained in recent years that we think we can't live without, and then rewind our history. How much do you love animals? If you can't get enough of our animal friends, then be thankful you didn't live longer than 10,500 years ago, before humans started domesticating them. Or, as fun as camping may be, would you want to live outside permanently? Give a cheer to our ancestors 400,000 years ago; they were the ones who first started making shelters [source: Smithsonian Museum of Natural History].

Thinking about this long history, you might wonder how humans got to here from there -- and where we're headed.

First, let's back up to get a general idea of how evolution works. At its simplest definition, evolution is gradual change from one generation to the next. Just as your parents passed along their genes to you -- maybe giving you an affinity for math or natural inclination to sports -- early humans passed their genetic makeup on to their children.

Selection of these genes appears to occur in two ways: natural selection and genetic drift. In natural selection, members of a species that adapt to their environment have a better chance of surviving and reproducing [source: Futuyma]. For example, an early human who was a great hunter would have a better chance of eating over someone who came home empty-handed. This ability would ensure his or her survival. By surviving, this top-notch hunter would have an improved chance of having children and passing on certain attributes, such as strength or endurance, to the next generation. On the other hand, in genetic drift, completely random genetic variations are passed along without real significance to chance of survival [source: Futuyma].

Now that you have a little background, let's take a look at our early history. Click on over to the next page to learn about our ancestors, when we spread our wings and started traveling the globe, and how we've evolved. 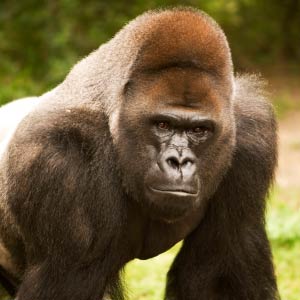 When we visit the ape exhibit at the local zoo, are we looking at a relative we inadvertently left off our Thanksgiving dinner invite list? No, not really. Even though we do share a common ancestor from about 5 to 8 million years ago with African apes, we went our separate ways in regard to evolution [source: PBS].

Since we set off on our own, several varieties of hominids, which is the classification for both us and our more human ancestors, fought it out to become what we are today. For a variety of reasons, like natural selection described on the previous page, most of these species went extinct -- and Homo sapiens won out. As fossils continue to be found, we're learning just how some of these extinct hominids are connected to us in our ancestral line [source: PBS].

From the time of our ancestors to now, we've garnered more than just domesticated animals to help us live a cushier life and adapt to our surroundings. We started making basic tools around 2.6 million years ago and took control of fire by 800,000 years ago. Then, at 200,000 years ago, we meet Mr. and Mrs. Homo sapiens, modern humans (yes, us!) who started evolving in Africa, where we hung out until we started traveling the globe about 60,000 years ago. Since the arrival of those early Homo sapiens, we've advanced considerably. We started burying our dead, making clothing, crafting musical instruments and art, farming and herding animals [source: Smithsonian Museum of Natural History].

In other words, we've gotten a whole lot busier. Just look at the modern family today -- juggling family life, school, careers and jobs. In the arena of natural selection, will those of us who have a stronger genetic disposition for multitasking win out?

This brings up an important question: Are we still evolving?

Popular opinion in the world of science is starting to lean toward "yes," as scientists point to ongoing changes in our genes. For example, remember how we started keeping those domesticated animals? Well, until we starting milking one of those animals, adult humans didn't need to be able to digest lactose. However, over the past 3,000 years, more and more people's digestive systems have evolved to be able to handle milk [source: Shute].

Take natural selection out of the equation and think about how humans may have the possibility to drive their own evolutionary changes. About 20 years ago, doctors discovered a process called pre-implantation genetic diagnosis (PGD). During PGD, doctors can remove an embryo, test it for certain genes and then choose whether to put it back. First used as a way to reduce a child's chances of getting a genetic disorder, some parents are now taking advantage of it to choose the sex of their child. And think the old formula of getting genes from just two parents will always prevail? Maybe not. Since the late '90s, about 30 babies have been born with the genes of one father and two mothers after their mothers had material from a younger woman's eggs added to their own -- helping give their more mature eggs a better chance of leading to pregnancy [source: Shute].

Regardless of whether we are getting our genes from two or 50 people, what is going on within our genetic code and how we might be able to control it are only parts of the equation of modern-day evolution. We have cultural and societal norms, too, and this code of accepted behaviors is a big part of how we evolve.

For example, one shift in societal norms in many countries was giving women and people of color the right to vote. In that respect, we have evolved, although the right to vote is still threatened by political corruption, violence and human rights violations in nations around the world. We still have a long way to go.

Thanks to our access to instant information -- Internet, mass media -- our social ideals can go viral quickly. And where we can make accepted steps in positive directions, we also have the ability to go backward. Sometimes, though, the direction is debatable. In fact, consider this as you set off on your day: Has our evolution to being continuously online degraded our sense of community or further connected us to society and the world in which we live, work and play? Where will we go tomorrow? And what is our next evolutionary step? 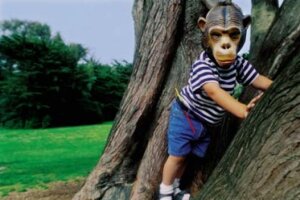 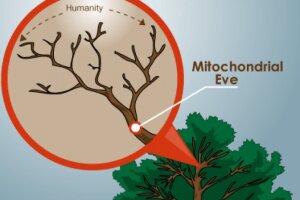