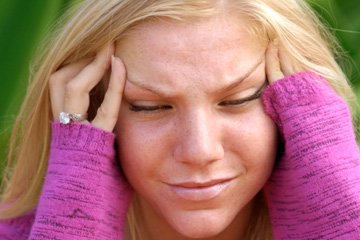 Is it a real headache -- or just in your head?
Comstock/Thinkstock

During World War II, Dr. Harry Beecher worked as an army medic, treating wounded soldiers in Italy. When he ran out of morphine, he treated the soldiers with a saline solution, but he didn't mention the switch. In about 40 percent of the cases, pain subsided anyway [source: Walker]. Beecher's findings played a notable role in theories about pain and the placebo effect, a phenomenon in which a person's condition improves even though the medication he or she takes isn't designed to heal the ailment. The reverse can happen as well -- in some studies, patients who were told they were taken off a powerful pain medication began to feel worse, even though they were still being administered the medication without their knowledge [source: Thernstrom].

The placebo effect is just one of the oddities that makes pain difficult to study. Because pain is such a subjective experience, it's a hard problem for doctors to treat. If your knee hurts after a fall on the ski slopes, then X-rays will determine if a bone is broken or not. But what if your knee hurts continually, and X-rays show no damage? In the past, many patients were written off with the dismissal, "It's all in your head."

With the advent of brain imaging, researchers are learning more about how the brain perceives pain, and they're finding that pain really might be all in a person's head -- but that doesn't make it any less real. Let's say that you stub your toe. Nerves in the toe known as nociceptors, tasked with sensing pain, go into action. They send messages to the spinal cord that pain has occurred; the worse the stub, the more rapidly and powerfully they fire. The spinal cord then releases neurotransmitters to the brain's thalamus, communicating with the brain that there's an injury. But there's not just one part of the brain that processes pain. The thalamus could forward the message on to the part of the brain that manages physical sensation as well as the part that controls emotions, memory and attention [source: Britt].

Once the acute pain of a stubbed toe recedes, these messages stop. But it's possible that people who experience chronic pain have different wiring somewhere along the line. In one experiment, all of the volunteers were subjected to a pain stimulus, and researchers found, through brain imaging, that the thalamus was activated in all of them. But those that were least able to withstand the pain stimulus also showed activity in the section of the brain that deals with emotion [source: Coghlan].

You don't need to conduct brain imaging to realize that emotion can exacerbate pain -- there's a reason why we try to distract babies with our car keys when they fall. When we're anxious or depressed about pain, the pain doesn't go away. In fact, it often seems to get worse. That's not to say that simply thinking happy thoughts will make pain go away; sometimes it will, but it's possible that certain people's brains have been rewired or altered to the point that the brain perceives pain even when there is none, physically.

These findings about pain could have implications for how we treat it. Rather than pumping a person full of painkillers, it may be better to use cognitive behavioral therapy. In one treatment under study, people were hooked to an fMRI machine and watched their brains under the influence of a pain stimulus. They learned to talk themselves down when pain levels began to spike, retraining their brain to keep pain in perspective [source: Thernstrom].