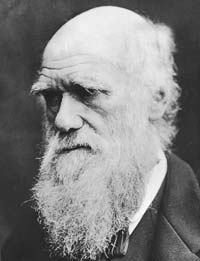 Organisms show variation of traits. "The many slight differences which appear in the offsprin­g of the same parents may be called individual differences. No one supposes that all the individuals of the same species are cast in the same actual mould."

More organisms are born than could ever possibly be supported by the planet's resources. "Every being … must suffer destruction at some period of its life, otherwise, on the principle of geometrical increase, its numbers would quickly become so … great that no country could support the product."

Some traits offer advantages in the struggle. "Can we doubt … that individuals having any advantage, however slight, over others, would have the best chance of surviving and procreating?"

Organisms that have those traits are more likely to successfully reproduce and pass the traits on to the next generation. "The slightest differences may turn the nicely balanced scale in the struggle for life, and so be preserved."

Successful variations accumulate over the generations as the organisms are exposed to population pressure. "Natural Selection acts exclusively by the preservation and accumulation of variations which are beneficial under the conditions to which each creature is exposed. The ultimate result is that each creature tends to become more and more improved in relation to its conditions."

Let's delve deeper into the concept of population pressure.