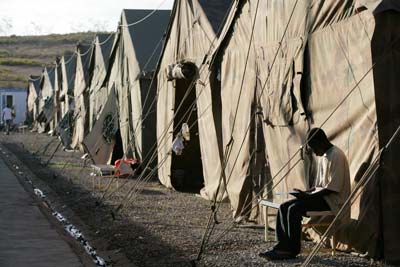 An African migrant is seen at the CETI, Short Stay Immigrant Center, on Oct. 20, 2005 in the Spanish Enclave of Melilla, Spain.
Marco Di Lauro/Getty Images

Where did humans come from? How did we get to where we are now? Where are we going in the future? Studying the migration patterns of humans gives us a glimpse of the development of human civilization and shows us the patterns of human existence. Studying modern migration helps us understand complex economic systems, and it might even give us a way to ensure the future survival of the human race.

In this article, we'll examine scientific research that shows how the earliest humans spread across the globe, and we'll look at modern migration patterns. Then we'll turn our gaze to space, the future target for human migration.

­No one knows for sure exactly when humans first became humans. Scientists use certain characteristics found in fossil evidence (generally the shape of the skull) to differentiate Homo sapiens from earlier species in the genus Homo, such as Homo erectus. Recently, genetic data has also been used to identify early human populations. Since we're not quite sure when humans evolved in Homo sapiens, we're also not really sure exactly how or when the earliest humans spread across the rest of the world. Paleoanthropologists have several theories based on the best evidence available.

The prevailing theory is the Out of Africa theory. Pre-hu­man hominids probably developed in Africa and spread to Europe and parts of Asia. The first Homo sapiens appeared in Africa roughly 400,000 years ago. This is strongly supported by genetic and fossil data. About 100,000 years ago, they moved north out of Africa into the Middle East, eventually pushing into Europe and Asia. Homo sapiens coexisted with earlier hominids such as Neanderthals. With their greater intelligence and organization, Homo sapiens out-competed other pre-human species for resources, enjoyed greater reproductive success and eventually replaced them.

A competing theory suggests that pre-humans that had already spread throughout Europe and Asia evolved into Homo sapiens. Separate regional Homo sapiens populations interbred, passing the characteristics of modern humans through the entire human population. This theory accounts for some of the regional differences seen between different human populations.

Today, the Out of Africa theory is widely accepted and has the most scientific evidence supporting it. This means that the story of humanity is a story of migration.

Continental Drift? Not a Factor

The movement of tectonic plates means that land masses that are now thousands of miles apart were once linked as one huge supercontinent. This had a huge influence on animal migrations, as scientists have found fossil remains of identical creatures in distant, unconnected places. Human migration, however, was not affected. Why? We're too new. By the time the first humans appeared, the continents were already pretty much in their present-day positions.­