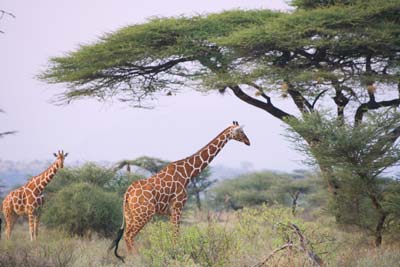 The process of natural selection can be sped up immensely by strong population pressures. Population pressure is a circumstance that makes it harder for organisms to survive. There's always some kind of population pressure, but events like floods, droughts or new predators can increase it. Under high pressure, more members of a population will die before reproducing. This means that only those individuals with traits that allow them to deal with the new pressure will survive and pass along their alleles to the next generation. This can result in drastic changes to allele frequencies within one or two generations.

Here's an example -- imagine a giraffe population with individuals that range in height from 10 feet to 20 feet tall. One day, a brush fire sweeps through and destroys all the vegetation below 15 feet. Only the giraffes taller than 15 feet can reach the higher leaves to eat. Giraffes below that height are unable to find any food at all. Most of them starve before they can reproduce. In the next generation, very few short giraffes are born. The population's average height has gone up by several feet.

The founder effect can also bring about rapid evolution. This occurs when a small number of individuals migrate to a new location, "founding" a new population that no longer mates with the old population. Just as with a population bottleneck, these individuals may have unusual allele frequencies, leading subsequent generations to have very different traits from the original population that the founders migrated from.

The difference between slow, gradual changes over many generations (gradualism) and rapid changes under high population pressure interspersed with long periods of evolutionary stability (punctuated equilibrium) is an ongoing debate in evolutionary science.

Next, we'll try to figure out how some traits have evolved that don't seem to benefit the individual organism that carries the trait.

Sometimes an organism reaches a state of evolution in which its traits are very well-suited to its environment. When nothing happens to exert strong population pressure on that population, natural selection favors the allele frequency already present. When mutations cause new traits, natural selection weeds these traits out because they're not as efficient as the others.