by Shanna Freeman
Prev NEXT
8

You Get New Brain Wrinkles When You Learn Something 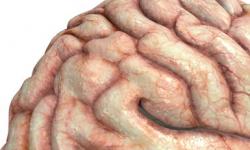 When you think about how your brain looks, you probably picture a roundish, two-lobed gray mass covered in "wrinkles." As humans evolved as a species, our brains grew larger to accommodate all of the higher functions that set us apart from other animals. But in order to keep the brain compact enough to fit into a skull that would actually be in proportion with the rest of our body size, the brain folded in on itself as it grew. If we unfolded all of those ridges and crevices, the brain would be the size of a pillowcase. The ridges are called gyri and the crevices are called sulci. Several of these ridges and crevices even have names, and there are variations in exactly how they look from person to person.

We don't start out with wrinkly brains, however; a fetus early in its development has a very smooth little brain. As the fetus grows, its neurons also grow and migrate to different areas of the brain, creating the sulci and gyri. By the time it reaches 40 weeks, its brain is as wrinkled as yours is (albeit smaller, of course). So we don't develop new wrinkles as we learn. The wrinkles we're born with are the wrinkles we have for life, assuming that our brains remain healthy.

Our brains do change when we learn -- it's just not in the form of additional sulci and gyri. This phenomenon is known as brain plasticity. By studying changes in the brains of animals like rats as they learn tasks, researchers have discovered that synapses (the connections between neurons) and the blood cells that support neurons grow and increase in number. Some believe that we get new neurons when we make new memories, but this hasn't yet been proven in mammalian brains like ours.

If you've ever gotten the feeling that there were hidden messages in commercials, TV shows or movies, the next myth should interest you.