Browse the article How Alcoholism Works 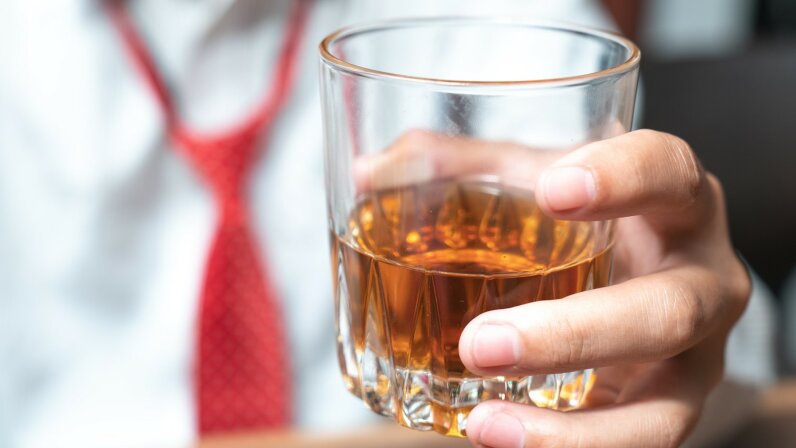 We've all seen the stereotypical "drunk" in movies and television shows: He's the one staggering down the street, clothing askew, slurring his words and tripping over his own feet. But in the real world, alcoholism is often much more difficult to spot. Alcoholics may hide their drinking problem from friends, family -- even from themselves.

In the United States alone, alcoholism affects millions of people and costs the country billions of dollars each year.

In this article, we'll learn the difference between heavy drinking and alcoholism, find out how alcohol affects the body, discover the genetic, social and physiological factors that lead individuals down the path to alcoholism and learn how alcoholics can get treatment for their addiction.

But first, what is alcoholism?

Most people can enjoy the occasional glass of wine with dinner or beer out with friends. But for other people, one drink becomes two drinks, which becomes four drinks -- they are unable to stop drinking.

Not everyone who drinks alcohol heavily is considered an alcoholic. People who drink regularly enough to affect their family or work responsibilities and who drink in a way that puts them in dangerous situations (for example, behind the wheel of a car while intoxicated) are said to abuse alcohol. Although they use alcohol in an unhealthy way, people who suffer from alcohol abuse do not necessarily develop a physical dependence upon alcohol.

Alcoholics, on the other hand, have a chronic disease. They are physically dependent upon alcohol. They feel a need to drink, almost in the same way that most people feel the need to eat. And once alcoholics start drinking, they are unable to stop. They develop a tolerance to alcohol, requiring more and more drinks to feel the same effects. When an alcoholic tries to cut down or stop drinking, he or she experiences the symptoms of withdrawal: sweating, nausea, shakiness, anxiety and delirium tremens (seeing images, severe shaking, confusion).

More than 17 million Americans abuse alcohol or are alcoholic, according to results from the 2001-2002 National Epidemiologic Survey on Alcohol and Related Conditions (NESARC). Alcoholism affects men more than women: About 10 percent of men, compared to 3 to 5 percent of women, become alcoholics over the course of their lifetime. Men who drink 14 or more drinks a week and women who drink more than seven drinks per week are at risk for alcoholism. Alcoholism is more prevalent among younger people (ages 18-44) than among older people.

Do You Need Help?

If you or someone close to you is (or may be) an alcoholic, here are a few online resources that can help you or your loved one:

Why is it that some people can drink socially and not become addicted while others become alcoholics? The reason has to do with a combination of genetic, physiological, psychological and social factors.

Genes may be an important factor triggering the development of alcoholism. Research has indicated that children of alcoholics are four times more likely to become alcoholics themselves; and while this statistic is at least partly due to environmental factors, scientists have determined that there is a genetic link. Researchers are working to pinpoint exactly which genes increase a person's risk of becoming an alcoholic in order to develop new medications to treat alcoholism.

Physiologically, alcohol alters the balance of chemicals in the brain. It affects chemicals in the brain's reward center, such as dopamine. The body eventually craves alcohol to restore pleasurable feelings and avoid negative feelings. People who already suffer from high stress or psychological problems such as low self esteem and depression are at higher risk for developing alcoholism.

Social factors such as peer pressure, advertising and environment also play an important role in the development of alcoholism. Young people often start drinking because their friends are doing so. Beer and liquor ads on television tend to portray drinking as a glamorous, exciting pastime.

Living with an Alcoholic and Do You Need Help?

Alcoholism doesn't only take its toll on the alcoholic -- it affects everyone around him or her, especially family and friends. Research shows that more than 40 percent of Americans have been exposed to alcoholism in the family. One in five has grown up with an alcoholic. Children of alcoholics are more likely to be abused and to experience anxiety, depression and behavioral problems than children of non-alcoholics. They also have an increased risk of becoming alcoholics themselves. There are several organizations geared specifically to treating the families of alcoholics, including Alanon.

How alcohol is absorbed in the body

After the alcohol is absorbed, it enters your bloodstream and is carried throughout your body. As the alcohol acts upon the body, the body is simultaneously working to remove it. The kidneys and lungs remove about 10 percent of the alcohol in the urine and the breath (which is why a breathalyzer test can be used to measure a person's blood alcohol level). The liver breaks down the rest of the alcohol into acetic acid.

After just a few drinks, the physical effects of alcohol become apparent. These effects are related to the blood alcohol concentration (BAC). The BAC goes up when the body is taking in alcohol faster than it can release it. To learn about specific impairments at various BAC levels, see How Alcohol Works: The Effects of Alcohol.

Most of us have witnessed the outward signs of heavy drinking: the stumbling walk, slurred words and memory lapses. People who have been drinking have trouble with their balance, judgment and coordination. They react slowly to stimuli, which is why drinking before driving is so dangerous. All of these physical signs occur because of the way alcohol affects the brain and central nervous system.

Alcohol affects brain chemistry by altering levels of neurotransmitters. Neurotransmitters are chemical messengers that transmit the signals throughout the body that control thought processes, behavior and emotion. Neurotransmitters are either excitatory, meaning that they stimulate brain electrical activity, or inhibitory, meaning that they decrease brain electrical activity. Alcohol increases the effects of the inhibitory neurotransmitter GABA in the brain. GABA causes the sluggish movements and slurred speech that often occur in alcoholics. At the same time, alcohol inhibits the excitatory neurotransmitter glutamate. Suppressing this stimulant results in a similar type of physiological slowdown. In addition to increasing the GABA and decreasing the glutamate in the brain, alcohol increases the amount of the chemical dopamine in the brain's reward center, which creates the feeling of pleasure that occurs when someone takes a drink.

Summary of alcohol's effects on the brain - Move your cursor over the colored bar in the lower left-hand corner to see which areas of the brain are affected by increasing BAC.

Alcohol affects the different regions of the brain in different ways:

In the short term, alcohol can cause blackouts -- short-term memory lapses in which people forget what occurred over entire stretches of time. The long-term effects on the brain can be even more damaging.

One drink is defined as:*

Long-term drinking can leave permanent damage, causing the brain to shrink and leading to ­deficiencies in the fibers that carry information between brain cells. Many alcoholics develop a condition called Wernicke-Korsakoff syndrome, which is caused by a deficiency of thiamine (a B vitamin). This deficiency occurs because alcohol interferes with the way the body absorbs B vitamins. People with Wernicke-Korsakoff syndrome experience mental confusion and lack of coordination, and they may also have memory and learning problems.

The body responds to the continual introduction of alcohol by coming to rely on it. This dependence causes long-term, debilitating changes in brain chemistry. The brain accommodates for the regular presence of alcohol by altering neurotransmitter production. But when the person stops or dramatically reduces his or her drinking, within 24 to 72 hours the brain goes into what is known as withdrawal as it tries to readjust its chemistry. Symptoms of withdrawal include disorientation, hallucinations, delirium tremens (DTs), nausea, sweating and seizures.

To learn more about how alcohol affects the brain, see How Alcohol Works.

Areas of the body affected by alcoholism

We already discussed long-term damage to the brain. Over time, alcohol can inflict serious damage on other body parts as well.

The effects of alcohol are even more marked in adults over 65, because their bodies don't metabolize alcohol as well as those of younger adults. Women also have more difficulty metabolizing alcohol than men, because they are typically smaller and lighter in weight. Also, alcohol can be deadly when combined with certain medications, such as pain killers, tranquilizers and antihistamines.

Alcohol is especially dangerous to unborn babies. Exposure to alcohol in the womb can lead to fetal alcohol syndrome, the number one preventable cause of mental impairment.

Inside the developing fetus, the embryonic cells that will eventually form the brain are multiplying and forming connections. Alcohol exposure in the womb can damage these cells, impairing the development of several structures in the brain, including the basal ganglia (responsible for spatial memory and other cognitive functions), the cerebellum (involved in balance and coordination) and the corpus callosum (aids communication between the right and left halves of the brain). When babies are exposed to alcohol in the womb at any stage of pregnancy, they have more difficulty later in life with learning, memory and attention. Many are also born with a smaller-than-normal head and facial abnormalities. Because researchers don't know exactly how much alcohol a mother has to drink to cause harm, the U.S. Surgeon General recommends that pregnant women abstain from drinking alcohol during pregnancy.

In the United States, approximately 2 million people get help each year for alcoholism. Alcoholism treatment may include:

The effectiveness of these programs varies depending upon the severity of the problem, the social and psychological factors involved and the individual's commitment to the process. A 2001 study found that 80 percent of people who had gone through a 12-step program such as AA remained abstinent six months afterward, compared to about 40 percent of people who didn't go through a program. Studies have also found that combining medication with therapy works better than either treatment alone. Medication addresses the chemical imbalances that cause alcohol addiction, while therapy helps people cope with abstinence.

Unfortunately, there is no "cure" for alcoholism. Recovering alcoholics must continually work to prevent a relapse. However, a 2001-2002 survey by the National Institutes of Health found that approximately 35 percent of alcoholic adults were able to fully recover from their addiction.

For more information on alcoholism, including treatment resources, check out the links on the next page.

In Dollars and Do You Need Help?

Alcoholism costs the United States an estimated $185 billion per year in medical expenses, crime, lost productivity and accidents, according to the National Institute on Alcohol Abuse and Alcoholism.